The Vincentian Family, during the “Finding Vince 400” film Festival, is organizing an event with the Synod of Bishops titled “When Charity Calls you”, at the Auditorium Conciliazione in Rome, on Saturday, 20 October at 6:00 PM. It is an opportunity to use the language of art to think about Charity and God’s love, experienced in the poor and the outcast, that changed the life of Saint Vincent de Paul and still calls men and women from around the world every day to counter new forms of poverty. Jim Caviezel, who played Jesus Christ in Mel Gibson’s film The Passion Of Christ, will share his spiritual journey in a candid interview. Piera degli Esposti and Massimo Popolizio will read excerpts from C. Peguy’s the Portico of the Mystery of the Second Virtue. Sarah Maestri and Giovanni Scifoni, who will read texts by Saint Vincent and the rewritten story of the Saint’s life, will make us rediscover his story, his life and way of praying. Songwriter Ron and the international musical group Gen Verde will entertain us with their music: together, they will bear witness to Saint Vincent de Paul’s action at the beginning of the fifth century of the Vincentian charism, through a story told by images, music and entertainment, directed by Andrea Chiodi and hosted by Arianna Ciampoli.

This event is open for everybody. However, number of seats in the Auditorium is limited.

To book your reservation, write to: 20ottobre@famvin.org. 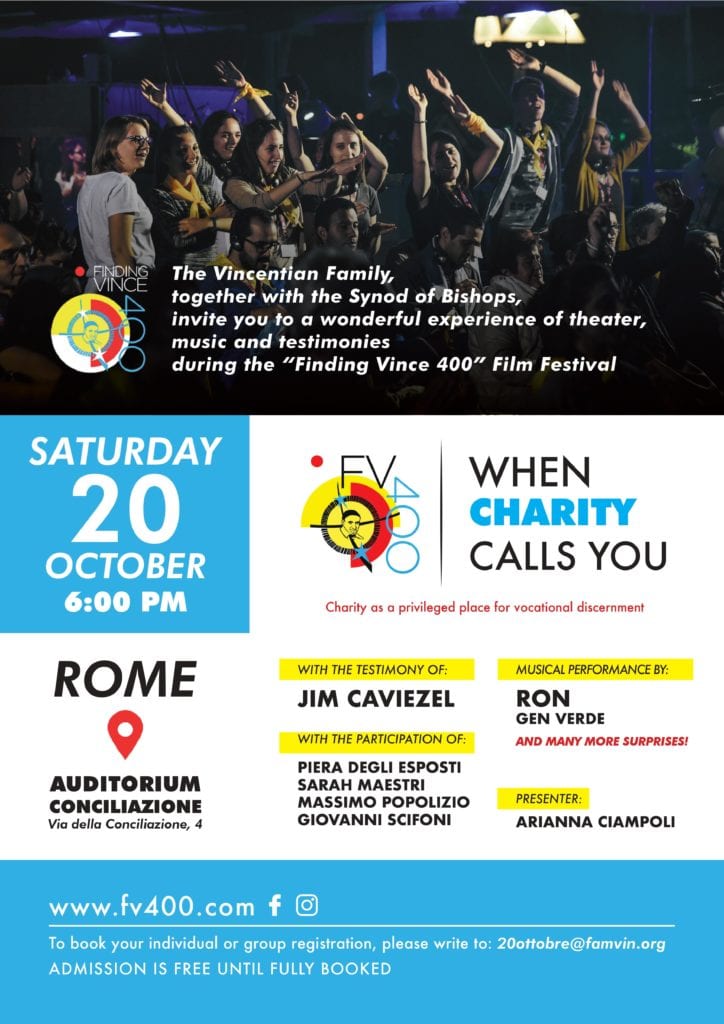