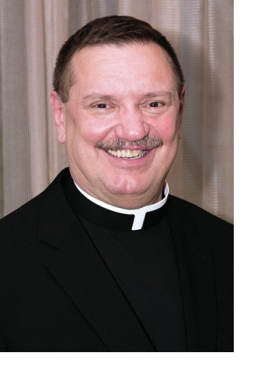 Father Stephen Grozio, CM, the Visitor of the Eastern Province of the United States, shares with us his letter that was sent to the confreres of his Province … a letter in which he speaks about his experience during the Vincentian Youth Gathering (EJV) that took place from January 18 to 20 in Panama prior to the celebration of World Youth Day (JMJ) and the meeting with the Pope. It should be noted that confreres from the Eastern Province minister in Panama, thus making Panama a missionary region of the Eastern Province.

Although I was not able to stay in Panama and participate in all of the World Youth Day (WYD) events, the experience was impressive. From the moment one arrived in Panama, it was obvious that the entire country was filled with expectation and enthusiasm. Everyone you spoke with was excited by the Pope’s visit, and signs for JMJ 2019 (Jornada Mundial de Jovenes = WYD) were everywhere. Even businesses had signs in their windows, some indicating that they were sponsors or benefactors of the event.

As was mentioned in last week’s letter, St. Mary’s Parish was a registration center for some 4,000 pilgrims arriving for WYD. Special recognition must be given to the parishioners, who formed a well-trained and well-coordinated team of about 30-40 volunteers. They greeted everyone with warmth and joy, and competently solved every problem the pilgrims had. They worked long hours without complaining. On Monday night, after most of the volunteers had gone home, another busload of pilgrims arrived and the remaining volunteers stayed to help them until about 2:30 a.m. Their welcoming attitude, strong sense of mission, dedication to the task, competent preparation, and joyful spirit were evident in all of the volunteers for the WYD and contributed to the unity, joy, and faith shared by all.

Since Pope Francis did not arrive until Wednesday evening, Teodoro Justavino and I helped to staff the Vincentian Family exhibit at the Vocation Fair on Tuesday and Wednesday mornings. It was an opportunity to meet many people and speak with them one-on-one. A few were seriously considering religious life. The fair was located in a large city park which was also the site for concerts, conversation, cultural exhibits, confessions, and Eucharistic Adoration. A special joy of being at the fair was bumping into youth who were at the Vincentian and Indigenous gatherings. They all felt welcome at our Vincentian Family exhibit, rightly so, since they are members.

On Wednesday evening, the confreres in Balboa watched the Pope’s motorcade on television, but the parish volunteers took a short walk to a nearby highway to see our Pontiff pass by. This was very important for them because, as a television commentator pointed out, this will be the only opportunity most of the Panamanian people will ever have to see the Pope.

The Pope’s visit was also having an effect on our confreres in Panama and on the pilgrims. One of the pilgrims from St. John’s University who attended the Vincentian WYD told me that she only knew the people there for two days, but she felt that they had been friends for a long time. A confrere from Panama admitted that he had not been enthused about the prospect of WYD, but after seeing how parishioners, especially the youth, were energized by the event, he was going to help them keep that “fire” alive and to encourage them to raise funds to send parish youth leaders to the next WYD. Another confrere, Teddy Rios, mentioned that several Protestant churches in the area had generously hosted pilgrims who had come to his parish. He envisions collaborating with those churches on future projects.

By leaving Panama on Thursday, I was able to join the confreres for Friday’s celebration of Foundation Day in the Shrine. Daughters of Charity, members of the Vincentian family, affiliates, and employees of CAMM joined with us in the Eucharist. Greg Cozzubbo presided and John Freund was the homilist. Afterwards, we all went downstairs for a light luncheon. Later that evening, we had a special Feast Day meal in the refectory. On these special occasions, the confreres from St. Catherine’s Infirmary come over and join the confreres at St. Vincent’s. It is one of the ways the house promotes community living.

Some final notes. Emmet Nolan wrote that preparations are going well for the interprovincial internal seminary in Guatemala. Please keep in touch with him and keep him in your prayers. Also, here is a link to a picture from the Pope’s luncheon with youth leaders on Friday. The young woman on his right is Emilda Santo Montezuma. She is a youth leader from St. Vincent’s Parish in Soloy and wearing the traditional garb of her indigenous people. Her presence at the luncheon is an important recognition of indigenous youth by the Pope. Also included in this Notebook are pictures and a summary of events from Joe Fitzgerald.

Your brother in St. Vincent,