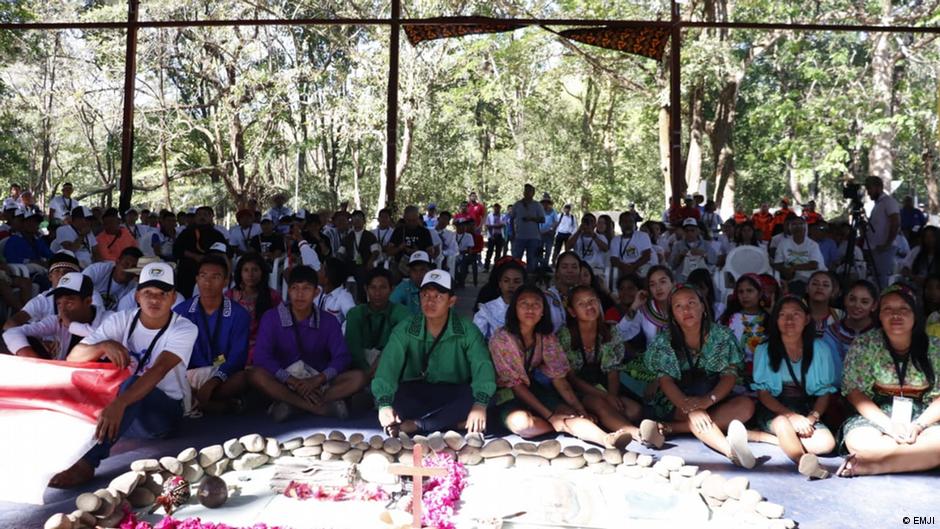 “Marginalized take center stage at World Youth Day 2019”, reads the title of one many article written in response to the active presence of indigenous youth at WYD Panama. It was not by chance that indigenous youth and the realities that indigenous peoples face became one of the central news items at WYD, and one mentioned repeatedly by Pope Francis. It was rather the fruit of the arduous work of hundreds of indigenous youth determined to share with the world their faith in Christ from the richness of their cultures and worldviews, to show the “indigenous face of the Church” during WYD. More than just a novelty at WYD, the voice and visibility of indigenous youth, with their struggles, joys and talents, bring us closer to living a “new ecclesial Pentecost” by opening spaces for encounters with indigenous peoples (Aparecida 91), and invites all to learn from those “who have so much to relate and recall from their culture and vision of the world” (Pope Francis to Panamanian authorities). 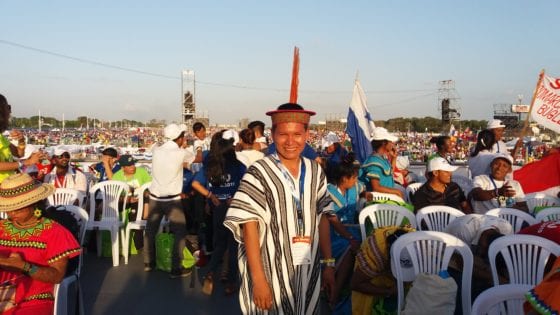 A little background… At the end of World Youth Day 2016 in Krakow, the announcement by Pope Francis that Panama would be the next venue for WYD provoked the question in indigenous pastoral circles and among indigenous youth … “What does it mean to have WYD in this ancestral land, in the midst of countries with a high percentage of indigenous populations?” The question was transformed into commitment and a vision to show the “indigenous face” at one of the largest gatherings the Church celebrates. After a consultation process at various levels, the National Coordination of Indigenous Ministry, Panama (CONAPI) assumed the responsibility of implementing a plan with indigenous youth with three main thrusts, a) social and ecclesial inclusion, b) strengthening the leadership of indigenous Catholic youth and c) the promotion of awareness in the Church and society of the indigenous realities. Thanks to the financial support of ADVENIAT, the Vincentian Solidarity Office and the inscriptions of the pilgrims at the pre-WYD indigenous gathering, the project officially started in August 2017.

Indigenous youth in action… The tradition of having experiences the days before the WYD began several decades ago and includes “days in the dioceses”, meetings of congregations and movements. Most international pilgrims come to the host country to live the local culture and meet other young people who live the same charism. In this same spirit, the first World Indigenous Youth Gathering(EMJI for its initial in Spanish) was organized by young Panamanian indigenous, who became involved in social and ecclesial leadership processes.  They invited young indigenous people of the world to share their faith from their indigenous identities through prayer, art, dance, song, pilgrimages and moments of strong testimonies about the situations experienced by the indigenous communities of the various countries. The preparation incorporated the youth from around the world in processes of reflection on there “living memory” and the richness of their ancestral traditions as necessary elements for a viable future.  The various traditions and rituals, based on common sharing and harmony with Mother Earth, where celebrated during the EMJI, forming a symphony of cultures united in their common values. The EMJI took place in the community of Soloy (Saint Vicente de Paul Parish), indigenous Ngäbe lands, with the participation of 2,000 indigenous people, among them 400 pilgrims from 40 distinct indigenous peoples.

Pope Francis surprised the youth at the EMJI with a video message at the beginning of the gathering, encouraging them to deepen their reflection on the prepared topics; value the living memory of their peoples, live in harmony with our Common Home and commit themselves to the construction of the “other possible world”. The Pope ends the video with an affectionate expression in the Ngäbere language, ” Jatuaida jamäräkädre” (see you later, my family).

At the end of the EMJI, the young people wrote a strong and precise message for the world, which demands that governments “recognize and delineate indigenous territories, and provide an education that respects our peoples as distinct cultures, with their own riches and wisdom”. The message also calls on the Church to open “appropriate spaces to live our spiritualities, from our worldviews, inheritance of our ancestors, and respect for the particular theologies of our peoples, fruits of the synthesis between our ancestral faith and the fullness of our hope in the person of Jesus Christ. The time has come to live with joy the indigenous face of the Church!”

After the EMJI experience, the young indigenous Catholics migrated to Panama City for WYD with a defined mission: to share with the world the fruits of the EMJI, their faith, their struggles, and to show with joy the indigenous face of the Church. The Indigenous Village, a space in the Parque de la Juventud, served as a wonderful space for the indigenous pilgrims to share their testimonies, dances, songs and art with the other non-indigenous pilgrims, in addition to sharing the messages of the Pope and the EMJI, promoting awareness of the “indigenous cause”. More than 3,000 pilgrims visited the Indigenous Village during the four days of the activity.

In addition to the indigenous village, there were several other moments of promotion of the indigenous cause in the ambient of WYD, such as: a several day program where indigenous Guna youth shared their faith, challenges, as well as cultural expressions such as songs and dances with German pilgrims; a conference on “The Church and Indigenous Peoples” organized by the French Bishops Conference at a theater; a forum at the Museum of the Interoceanic Canal, which focused on the main challenges that indigenous people face in society and in the Church; a testimony given by an indigenous youth from the Amazon region of Brazil to hundreds of thousands of pilgrims from the main stage about the effects of climate change on the Amazon and the peoples who call it home.

Pope Francis responds…Perhaps what called most attention to the active presence of indigenous youth at WYD came from an unexpected place; Pope Francis´ repeated emphasis on the importance of the indigenous pre-gathering and the indigenous presence in the WYD.  As previous mentioned, the Pope surprised those gathering for the World Gathering of Indigenous Youth in Soloy with a video message that stressed the importance of “taking charge of your roots”.  He took up that theme on several occasions throughout his speeches and in more casual moments.  In his first public discourse, to Panamanian authorities, the Pope stated that the “The genius of these lands is marked by the richness of its indigenous peoples”, naming each of the seven indigenous peoples.  He then shared his enthusiasm for the celebration of the EMJI in Soloy, stating that “it does not stop being a hopeful sign that this World Youth Day had begun a week ago with the Gathering of Indigenous Youth… I greet you from here and I thank you for taking this first step of World Youth Day.”

During his meeting with the Conference of Central American Bishops, Francis spoke of the importance that “none of the good that God has planted will languish”, that “caring for these roots means caring for the rich historical, cultural and spiritual heritage that this land has for centuries been able to harmonize”.  He connected the theme of caring for the “seeds of the Kingdom” that God has planted to the celebration of EMJI, saying “I congratulate you for the initiative that this World Youth Day has begun with the Indigenous Youth (Gathering) in David. It is a first step to show the plurifacetism of our peoples.” Acknowledging the reality of indigenous peoples during Stations of the Cross, the Pope said that the passion of Christ “is prolonged in the original peoples, who are stripped of their lands, their roots and their culture, silencing and extinguishing all the wisdom they have and can provide us.”

Perhaps the most emotional words of the Pope in reference to the indigenous youth gathering and their active presence in WYD were the simplest. During the first large gathering of the world´s youth with the Pope for the opening ceremony, he said, “I am thinking of you, starting to walk first in this journey, the indigenous youth. They were the first in America and the first to walk in this encounter. ¡A big round of applause!”  In later reflection, this was singled out as a pivotal moment by the indigenous youth, who were overcome with emotion that the Pope would speak so directly to them and invite everyone to acknowledge their presence and participation. It marked a “we are truly here” moment, a “we are a vital part of this” feeling amongst the indigenous youth.

In a more personal and intimate moment, the Pope had lunch with ten young people, representative of the world´s youth, where they were invited to share their concerns and hopes. One of the ten was Emilda Santo Montezuma, a young woman from the San Vicente de Paul ngäbe mission parish in Soloy who spent the past year working full time as a coordinator of the indigenous youth gathering.  Emilda was invited to represent the world´s indigenous youth at the lunch.  She presented the Pope a Ngäbe Chief´s hat, which he then wore for the official photos. She also gave him a copy of the “Message from the World Indigenous Youth Gathering” and spoke of the urgent need of the Church to accompany indigenous peoples in their struggle for dignity and land rights.  At the Pope´s final meal with local bishops before heading back to Rome, he spoke about Emilda and how impressed he was with her enthusiasm in speaking of the indigenous face of the Church and the rights of indigenous people in society, highlighting in particular her concern for the situation of particular Amazonian peoples of Brazil who are facing genocide due to government-backed extensive ecological destruction.

After his return to Rome, in his reflection about the experience in Panama, the Pope used the process of the indigenous youth meeting in Soloy and the posterior arrival of the world´s diverse youth for WYD as a prophetic sign of the hope that shows the “beauty of the multiform face of the Church”, and that with “their desire to meet they have given the world a true testimony of peace”.  He stated that the indigenous youth gathering in Soloy was a “beautiful gesture”, and “import initiative which demonstrated even better the diversified face of the Church in Latin America.” He continues…

Then, with the arrival of groups from all over the world, a great symphony of faces and languages was formed, as is typical of this event. Seeing all the flags displayed together, waving in the hands of young people who were happy to meet each other, is a prophetic sign, a sign that runs counter to today’s sad tendency toward hostile nationalism that builds walls and is closed to universality, to the encounter of peoples. It is a sign that young Christians are the leaven of peace in the world.

The road ahead…In his video message to World Indigenous Youth Gathering, the Pope says, “May your actions, the consciousness you have of belong to your indigenous peoples, be a reaction against the throw-away culture, against this culture that has forgotten its roots, projecting to a future more and more ´liquid´, without foundation”.  He continues, using the example of an unnamed poet, saying, “everything that blooms on a tree comes from that which is underground, the roots, but roots that grow towards the future, projected towards the future. That is your challenge today!” All signs show that young indigenous people are up to Pope´s challenge and will continue to bear fruit from the richness of their ancestral cultures in the “protection of our Common Home and the collaboration in the construction of the ‘other possible world’, more equitable and more human”.