A Vincentian Brother Reflects on his life, ministry, and community 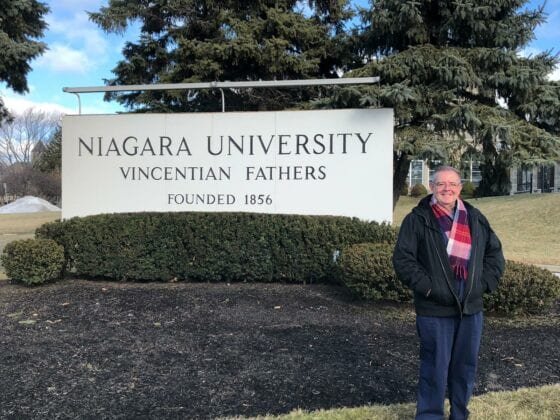 Brother Martin Schneider, C.M. and his 46 years at Niagara University

Today across the world, there are many young people aspiring to become Vincentians, including some want to become Vincentian Brothers. But sometimes they don’t know what the vocation of a brother really is or the role of a brother in the church and in the congregation of the Mission in particular. To give the opportunity to the younger generation to know what the vocation of a brother is all about and what it implies, Brother Martin Schneider, C.M. graciously consented to an interview in which he tells us about his life, vocation, ministry and vision for how to promote a culture of vocations.

Martial Tatchim: Br Martin, could you briefly introduce yourself?

Martin Schneider:I am a native of Brooklyn, New York and one of two children. My elder sister, married with children, leaves in Florida. I grew up in Brooklyn, attended primary and high school there. After my high school graduation, I worked for a year before I entered the Vincentians. It was at that time my family moved to Florida, which has been my family’s home for over fifty years.

MT:How did you learn about the Congregation of the Mission?

MS: I became acquainted with the Congregation through friends who attended St. John’s Prep in Brooklyn. That’s how I came to know the Vincentians. At other times, CM’s would come to our parish in Brooklyn to give a novena. It was my introduction to Vincentians at a young age.

MT:What made you to join the Congregation of the Mission?

MS: Where we lived in Brooklyn, our neighbor had a relative who was an Irish Christian Brother.  I would always find time to speak with him on his home visits.  If I have to pick a point in time when I believe the “seed” for my vocation was planted, it was from him.  And so, I began to explore different religious orders that had Brothers: Franciscans, Christian Brothers, the Vincentians, the Oblates, the Brothers of Mercy. Of all the information I received, the Vincentians impressed me the most.  I knew they worked with the poor. One of the things that struck me was the work that St. Vincent did with the poor, and I wanted to learn more about that.  Over the course of time I chose to seek admission to the Vincentians.

MT:You know that in the Congregation of the Mission, we have brothers and Fathers. Why did you choose to become a brother? Could you tell us more about that?

MS:   I just felt God was calling me to be a Vincentian in the capacity of the Brotherhood. And I felt that what I would be doing with my life would be very fulfilling and rewarding as a Vincentian Brother

MT: What are the ministries in which you served in the Congregation of the Mission? After your formation, did you begin by teaching or you did other things

MS: Once I finished my novitiate, I was assigned tour Lady of Angels Seminary in Albany, NY.  This was an inter-diocesan major seminary run by the Vincentians.  I was assigned there for almost ten years as assistant Librarian and taught religious education in one of our local parishes in Albany. When the seminary was closed, I was assigned to Niagara University and I have been here for forty-six years now.  I am fifty-six years in vocationy.

MT: Can you say more about your current ministry here in Niagara as a teacher?

MS: Since Niagara was an educational institution, it was my desire to enter into the teaching part of the University.  At first, I was assigned to the Theatre Department as assistant to the director.  Finally, I decided after a number of years of administrative work that my call was to be in the classroom.  Being a college teacher was good, but as a Vincentian and as a brother, this was the opportunity for possible vocations.  Students would hopefully see that the Vincentians were a community of brothers as well as priests.  After teaching, I became the director of student activities for almost five years giving me more exposure as a Vincentian to the student body.

Presently I am back teaching as a professor of Public Speaking, again giving the students the ability to see and know a Vincentian. Besides my teaching obligations I have been coordinating public events at the University, such as convocations and commencements for thirty-six years.

MT:  We know that in the CM, there is a decrease in the number of clerical and lay confreres. According to you, what justifies this?

MS: Where we are today is not the same as thirty years ago. The attraction we had is lost. Young men and woman are no longer attracted to us. The vows that we take, are difficult for the young to accept.  Hence, one of the reasons that vocations are few.

MT: As a response to this, what can the church or the Congregation of the Mission do to remedy to this problem?

MS:What we should do is what we are trying to do at Niagara: have a presence in the classroom on a day to day basis. We as Vincentians should be in the classroom as much as possible. Teach more classes if possible. Presence is the key factor. That brings our presence to them. We need to socialize more with the students, especially now that we are very few.

MT: Do you think there is something to change or renew in our approach?

MS:Yes, I think we do have to change a few things we do. We have to start by being aware of what is going on in society, especially with what is going on in the lives of the young people. Walk around, come to them, be more visible to them, socialize with people, go to them, they might not talk to us, but our presence can be consoling or of interest. We need to be more open, and not appear like a closed community. We need to invite them to our home on occasions and let them see the way we live.  See how we live and pray. These could be a point of attraction.