Vicentian Missionaries: 200 Years of Mission and Charity in Brazil

In 2020 the Vincentian Missionaries, members of the Brazilian Province of the Congregation of the Mission (PBCM), are celebrating two hundred years of presence and service in the country of Brazil. At the end of November, 1819, animated by the missionary spirit to go throughout the world and inflame the hearts of people with the love of Christ, two Portuguese members of the Congregation of the Mission (Father Antônio Ferreira Viçoso and Father Leandro Rebelo arrived in Rio de Janeiro and in 1820 estabished the first mission in Caraça (Brazil). 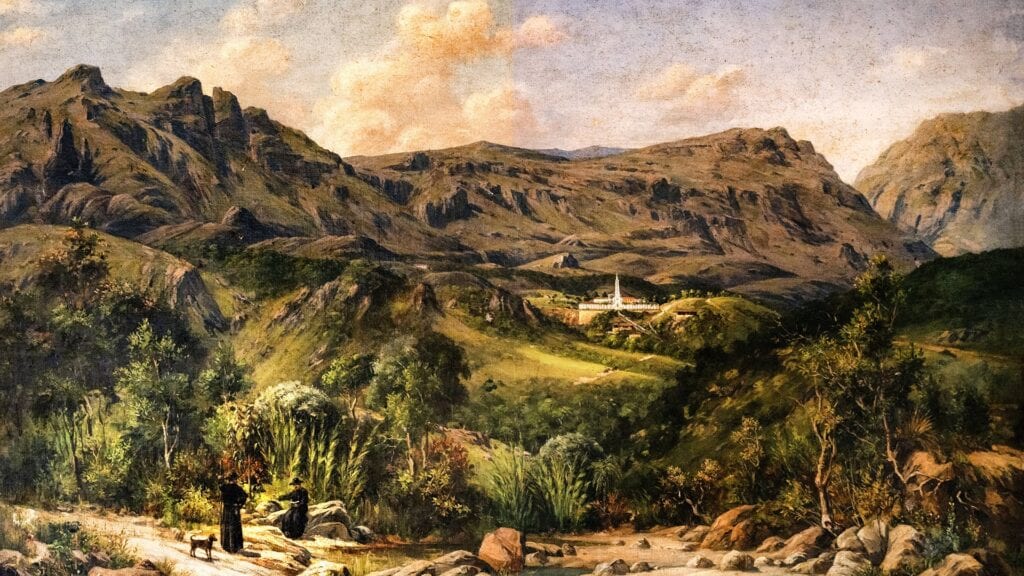 [1] From the shrine in Caraça, the Vincentian mission expanded and slowly encompassed various regions of Brazil. From 1820 until 1970 the confreres were involved in the formation of the diocesan clergy, in the promotion of popular missions and in the education of young men and women.

The Vincentian Missionaries (the “Lazarists”, the “priests and brothers of the mission”, as they are also known in Brazil) ministered in the formation of the diocesan clergy. With a selfless love and generous service to the Church, the members of the Congregation accepted the administration of nineteen diocesan seminaries (major and minor seminaries), thus ministering from the north to the south of this country. Relying on confreres from the Province of Paris, this group collaborated in the formation of countless priests. These members of the Congregation, with a boundless dedication, (an expression utilized by the historian Riolando Azzi), provided much needed assistance to the bishops who were committed to the reform of the church during the second half of the nineteenth century. Following the directives of the Council of Trent, their ministry strengthened the seminaries and the spiritual, moral and intellectual renewal of the clergy.

In various cities, the members of the Congregation organized missionary centers where teams were formed that preached popular missions. The Vincentian popular mission was offered free of charge and had a duration of one-month. The confreres developed a doctrinal catechesis in simple language and their teaching was focused on conversion and frequent participation in the sacraments and other official pious activities. Special attention was given to those people who were poor through the development for several programs that provided them with assistance. In light of so many difficulties, the great pastoral zeal of the confreres enabled them to reach out to countless cities and towns throughout Brazil. The missionaries provided much assistance in the process of evangelization and the religious instruction of the people.

The confreres were also engaged in the ministry of education especially in schools that they administered (the school in Caraça was their primary educational institution). This ministry was characterized by teaching the humanities and the primary objective was formation of one’s character and conscience … formation of the human person. The educational ministry of the confreres also encompassed diocesan seminaries and seminaries for the formation of members of the Congregation (these seminaries received many students from poor families and even though the majority of them were never ordained, the students received many benefits with regard to their personal and cultural formation).

[2] As a result of the Second Vatican Council, the ministry of the confreres experienced a series of changes. The Council documents had a great impact on the life of the Province and the years of 1960-1990 could be viewed as a period of crisis and great changes: the confreres no longer directed the diocesan seminaries; the popular missions ceased; the Province experienced a great vocational crisis (many priests and brothers abandoned the Congregation and the seminaries of the Congregation were closed).

Faced with a series of changes and events that were unleashed by the Council, confronted also with diminishment in personnel, the Province engaged in a great effort to renew and reorganize its missionary and administrative reality. Up until 1970, the confreres dedicated their efforts to the service of the Church, especially through their ministry of the formation of the clergy. They developed a strong historical identity as “missionary/teachers of the clergy. At the same time, there was little innovative ministry on behalf of the most poor and vulnerable members of society. The confreres had developed a strong personal and community identity that, as a result of the profound changes in the Church and in society, came to a sudden end.

During this post-conciliar era the missionary activity of the confreres began to take on a new form through parish ministry. In a process on on-going renewal, the members of the Congregation became more aware of their primary purpose, that is, the evangelization of the poor. New parishes were accepted in poor neighborhoods and the pastoral ministry took on an element of liberation. The Province also opened new missions ad gentes (confreres were sent to Mozambique and the Amazon). The ministry of the popular missions was once again initiated but with a new spirit and with the participation of the laity.

With regard to the ministry of formation, the confreres sought to renew their own seminaries through the introduction of a new pedagogy. In collaboration with the larger Vincentian Family, a new area formation arose, namely, formation of laity (especially among the lay members of the Conferences of the Society of Saint Vincent de Paul and the Lay Vincentian Missionaries). The Shrine in Caraça was completely reformed and the result was a process of evangelization from the perspective of culture, tourism and ecology. With regard to the educational ministry, the School in Rio de Janeiro achieved a notable development with the introduction of a pedagogy of liberation which in turn intended to form social activists and develop activities and projects of social promotion among the most poor and vulnerable members of society.

[3] At the present time, the sixty confreres of the Province have exerted themselves in achieving a creative fidelity which has emphasized missionary service among the poor. In a very modest way the members of the Provinces are present to and in the Church in various localities and they minister in parishes, (especially in poor neighborhoods), providing retreat opportunities, formation of candidates for the Congregation, occasional minister with the diocesan clergy (retreats, seminars, spiritual direction, etc.), popular missions, missions ad gentes, formation of the laity, education of young people, collaboration with the Vincentian Family and collaboration in the promotion of social projects with the poor.

In this time of epochal change, the mission of our province confronts many challenges on a personal, pastoral and institutional level. The members of our province recognize that they are heirs to a great history, one that must be remembered and valued, a history of many holy and wise confreres; a history in which the members were involved in innumerable and very significant works and achievements; a history oriented toward evangelization. We are called to build on that history and create a new story. We feel challenged to discern, listen to and accept the calls of the poor; to revitalize our missionary identity; to develop a new understanding of our vocation as well as a new spiritual sensitivity and a new missionary praxis.

Throughout its history, the province has been able to move forward as the result of the ministry of more than five hundred fifty confreres, priests and brothers, men from Brazil and from other countries, as the result of the ministry of countless friends, collaborators and benefactors. We are profoundly grateful and we render homage to all those who have participated and are currently participating in this two hundred year old history of mission and charity.

God of life and Lord of history, we praise you for the 200 years of presence
of the Congregation of the Mission in Brazil.
We thank you for your provident love which accompanied
those who preceeded us in the harvest of your kingdom.
We bless you for the fruitfullness of the Vincentian charism
which was sown in this country. We bless you for the fruits harvested
in the porcess of evangelization among the poor
and in the process of formation among the clergy and the laity.

You call us to follow your son, Jesus Christ,
clothed anew with his spirit and committed to the mission.
Forgive us the infidelities that did not allow us
to respond to the gifts that we have received.
Awaken in us a new awareness
and generosity that eneables us
to reach out to our brothers and sisters
in need and that enables us to also be
attentive to the signs of the time.

Animated by your Spirit,
we want to be constant in our prayer and discernment,
inventive in our charity, zealous in our mission,
firm in what is essential, open to what is new,
diligent in the initiatives before us and pacient in time of trial.
We also desire to mature and produce more fruit and to be nourished
by the Gospel and the Vincentian charism.

Gracious God, accept our gratitude
and strengthen our commitment
and our hope as we journey toward you.
We pray in the name of Jesus Christ,
our Lord, who came to evangelize the poor
in unity with the Holy spirit. Amen.

O Mary conceived without sin, pray for us who have recourse to you!
Saint Vincent de Paul, pray for us!