The words of the Superior General at the Missionary Vocational Festival 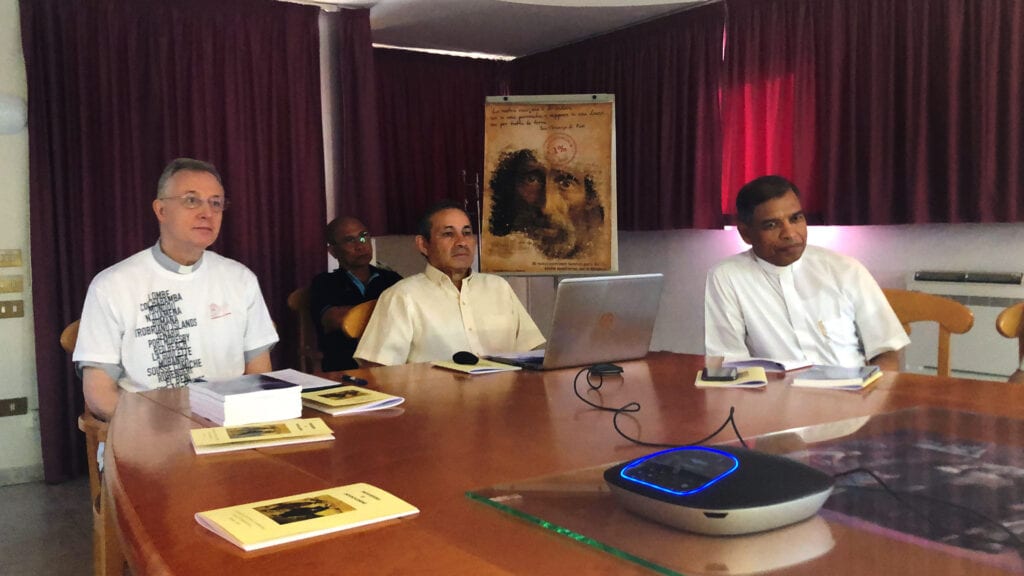 A few months ago, I would not have imagined meeting together with confreres, seminarians and young people who are vocationally restless from many provinces. This new reality that we are living has allowed us to carry out this meeting, I hope that at some other time, we can do it physically and be able to share personally as brothers.

In any case, I feel very excited about the organization of this Missionary Vocation Festival. What better way to start this Vincentian month than to think about the Call that Jesus has given us to go all over the world to evangelize the poor and, in the same way, to make our vocation real by the departure of many confreres for the missions.

The Call and the response were strong themes in 2018. Through a reflection on the Culture of Vocation that took place at the meeting of the Directors of Vocation Ministry in Paris, the Vocation was conceived as a journey in which the entire small company was involved. In that same year, in the month of October, we began to take steps with my Mission Appeal letter, where we began to talk about a campaign that I wanted to be continued year after year. We have named this campaign the “1%”. The objective is to motivate 30 confreres to make a decision to leave for the missions. Last year we achieved our goal and we presented those missionaries to the Holy Father Francis in October, the month dedicated to missions. Although it is true that not all the confreres who wrote to me at that time have already left for the mission, all will go and many are already adjusting to their new life as missionaries. 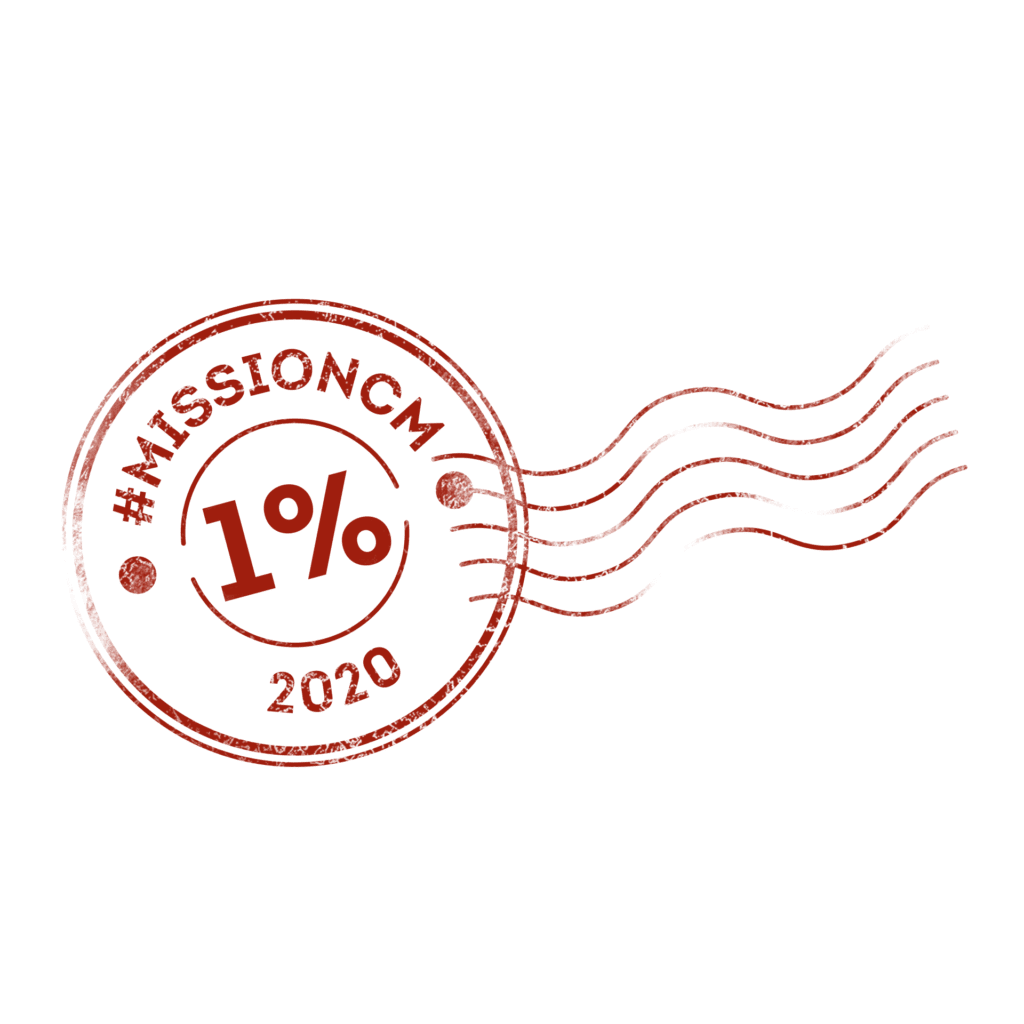 The 1%, in any case, is not a closed number. We are not saying that only 30 can go to the missions, or that they can only go to the so-called International Missions, which are the missions that depend on the General Curia. It seems that after some time after we started the international missions, as a way of establishing a Vincentian presence in countries and regions where we were not yet present, a mentality emerged that for a Vincentian missionary the meaning of missionary, is going to the International Missions. This vision can make the missionary concept of the Congregation too small.

The Congregation has been missionary since its foundation, and with the 1% campaign we seek to encourage the departure to a mission which is in a foreign land. However, we also wish to encourage reflection on the meaning of the Missionary Spirit in the Congregation, and recognize that our missionary dimension is not limited only to the International Missions. Our Missionary Spirit extends to missionary regions that many provinces have assumed. In addition, the presence of missionaries outside their countries of origin is due to the response that a certain province makes to a need expressed by a bishop or a particular church, which also corresponds to the call of the Church to go forth in service of the Missions ad Gentes. 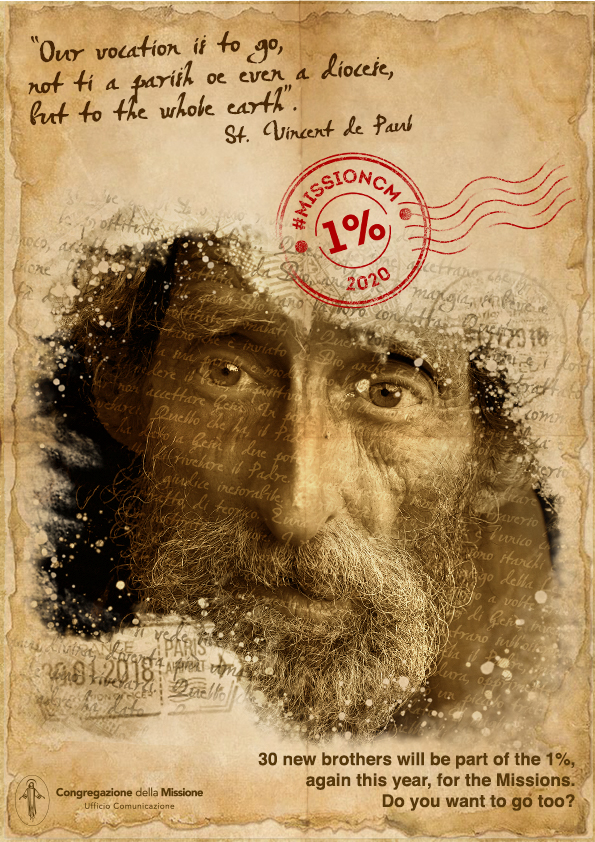 We have sought with this phrase to​maintain the same line of thought of walking, leaving, not staying static, anchored or attached to a single place. At the same time, the phrase seeks to recover our founding charism of being missionaries, of seeing being missionary as something natural and part of our vocation. To recover the universality and the internationality of the Congregation that seeks new horizons, wherever our missionary and Vincentian presence is necessary.

As everyone can see on our website, the communication office proposes the 1% seal as the logo of this campaign. Of course, in today’s world, we do not send many physical letters, but certainly this symbol reminds us of our holy founder’s own epistolary communication. It also takes us back to the need to receive this seal in order to leave, to go, to be sent, and of course to be received in another country. The stamp can never be missing in the passport.

The Campaign foresees some other initiatives, which will be made known throughout these months: posters, t-shirts, and many elements necessary for all of us to enter into this renewal of our Missionary Spirit.

The Communication office has created a new page where you can get to know about the missions. It is a page dedicated to the campaign where confreres who feel called particularly to Missions ad Gentes can begin their dialogue about their desire, always taking into account the opinion of their visitors. In the same way, in this month of September dedicated to Saint Vincent, it is a good time to learn about our various missions, which, as I have said, are not limited only to International Missions. Other moments of encounter are being prepared with confreres already in these mission sites. Taking advantage of technology, we want to reach all the places where we are present.

Finally, I want to conclude this call, starting from the roots of our missionary vocation. For this reason, I have decided to convene all the directors of vocation ministry of the different provinces and regions, and all the confreres involved in the apostolate of Vocation Ministry, to a first virtual meeting on Saturday, September 19 at the same time that we have celebrated this festival, 5:00 pm Rome time. I have asked Father Jorge Luis Rodríguez, director of the Communication Office, and Father Rolando Gutiérrez, of the Vice-Province of Costa Rica, to coordinate this first meeting to make proposals so that together we can support each other to vocationalize our Congregation.

Similarly, a month later, on Saturday October 17, I want to invite all those in discernment, initial formation, seminarians, students of the Congregation, to participate in a Virtual Encounter in which we can share as one family. I hope at this same time period. Soon I will communicate details of that meeting to the visitors.

May we prepare ourselves throughout this Vincentian month, to celebrate and live the month of October, fully dedicated to the missions and ready to receive my traditional letter in which I will once again make the missionary call.