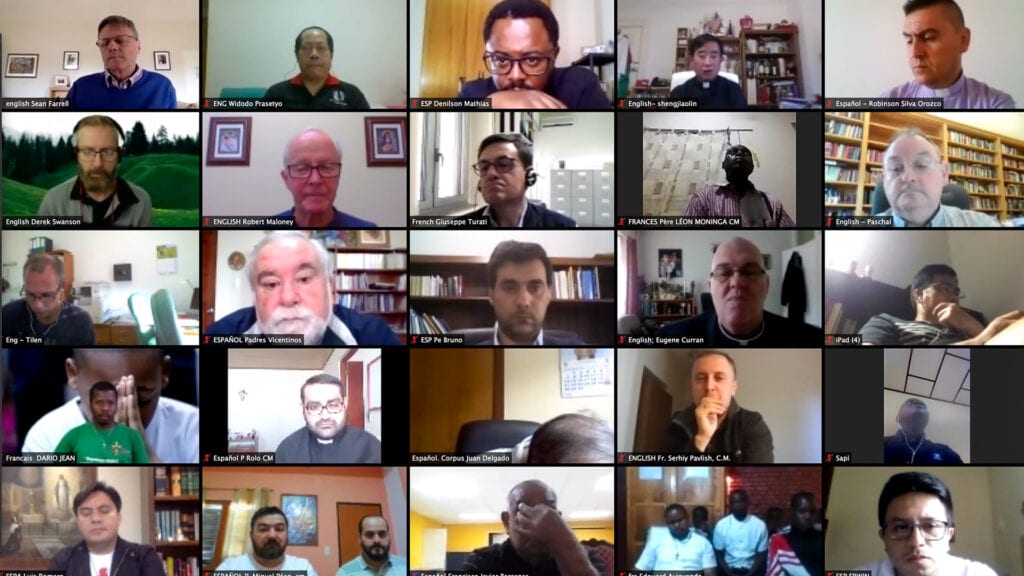 More than 80 confreres met on Saturday, 19 September, at 5 pm in Rome to share experiences of Vocational Ministry, generate reflection, and propose ways to energize the Vocational Culture in the Congregation of the Mission.

Organized by the General Curia, the event had as background the reflection that the Superior General has been offering on vocations since 2017 and the Meeting of Directors of Vocational Ministry, held in Paris in 2018.

In his message, the Superior General recognized that “the task of Vocational Ministry is a work that we have put in second place with regard to our missions and parishes. At other times, we have understood it with a bit of anxiety because the decrease of personnel makes us feel a certain pressure to increase vocations with the greatest possible promptness.” However, at the same time he encouraged those present to affirm that “This first meeting is a privileged moment to concretize options and commitments that can help our provinces’ Vocational Ministry and, at the same time, we can contribute from our different experiences and enrich the whole Congregation,” Father Tomaž said.

Then, it was the turn of the Vicar General, Father Javier Álvarez, who made a contextualized and analytical presentation of the Final Document of the First Meeting of Vocational Directors in 2018, which has as its title: “The Path Toward a Culture of Vocations in the Congregation of the Mission.”

The Vicar General commented on the three convictions of this document (“present state of our missionary vocation, ongoing formation, and accompaniment of young persons”). He emphasized that “Vocational Culture refers to the Vincentian charism and not to the institution of the Congregation,” and recalled the words of Pope Francis in Evangelii Gaudium 14: “It is not by proselytizing that the Church grows, but ‘by attraction’.”

Later, Father Rolando Gutiérrez from the Vice-Province of Costa Rica made a presentation that introduced the group work. He spoke about Vocation Ministry in times of pandemic and beyond it, presenting Vocation Ministry as an opportunity that invites us to set about seeking, in the style of Saint Vincent de Paul, who knew how to find that sense of seeking in the human heart and from there established the vocational bases of his foundations.

Three-Zoom meeting rooms were immediately arranged, one in each official language; namely, English, French, and Spanish. In these spaces, they had 45 minutes to discuss the vocational reality of the provinces and offer some ideas on possible initiatives that could be undertaken at the level of the whole Congregation. The desirability of a formative process for those responsible for vocational ministry was also analyzed.

After the plenary session in which the group secretaries presented the conclusions, there was an ultimate period of interaction and the final prayer led by Father Shijo Kanjirathamkunnel and the blessing given by the Superior General.