On May 9th, in countless cities and towns and villages, the feast of Saint Louise de Marillac was celebrated, the feast of a woman who, in the words of the hymn for First Vespers, placed her hope in God … and at the table of her children, set a place for the poor. In many parts of the world, our Holy Founder, Louise de Marillac was exalted with great solemnity, beautiful hymns, flower arrangements and heartfelt words. It was not so in other parts of the world where one missionary celebrated liturgical services in front of an ancient and discolored painting of the mother of Michel de Marillac. In many lands, in the midst of a wide variety of celebrations, the faith of the missionaries and the daughters was not lacking … and yes, the poor were also present. The poor who are now more numerous, more hungry and more lacerated by this new virus. We came together to honor this woman, Louise de Marillac, as mother, comforter and advocate for all people.

The solemnity of Saint Vincent has now arrived. Yet the reality is the same and perhaps even worse. Today the plague and hunger are to be found in the new Picardies and Champagnes of the world. It is also true that in these areas the Vincentian Family is attempting to respond to an unexpected, challenging reality: COVID-19. It has been an effective response that was able to put out the fire. But now we see the ashes and it is time to build anew.

This pandemic will pass. We, as people of faith and as women and men who trust in the Lord, are able to affirm the words of the Colombian singer/songwriter, Darío Gómez, no one and nothing is eternal in this world … not even this invisible virus. Everything will pass and we hope for a new heaven and a new earth (Revelation 21:1). I do not believe that we have a panacea for the present or for the future and I also do not believe that we are going to be saviors in light of this pain and new poverty that is appearing. Nevertheless, as Saint Paul states in his letter to the Galatians 6:2: we can share one another’s burdens.

Some paths that are open to us to discover:

1. To touch the wounded flesh of the body of Christ

In 2017, Pope Francis, like his venerable predecessors Paul VI and John Paul II, visited Colombia. During his discourse at the Cardinal’s Palace in Bogota (September 7th), the Pope addressed the Bishops in the following words: I would ask you not to be afraid to touch the wounded flesh of your own history and that of your people. Do so with humility, without the vain pretension of self-serving activism, and with a heart undivided, free of compromise and servility. God alone is Lord; since we are his shepherds, our hearts must not be subservient to any other cause. This heartfelt message is also addressed to us and it is most important for the sons and daughters of Saint Vincent de Paul. Today, as in the time of Vincent and Louise, the poor continue to increase in number and can be found everywhere. Therefore, the members of the worldwide Vincent Family must confront this situation. They must organize themselves and provide assistance and relief to those men and women who are poor.

It is right and just to dust off the pages of the history of our Founder in order to discover his many initiatives, his genius, and his ability to offer people affective and effective charity (CCD:XI:32-33). Let us look at a single event, the establishment of the Confraternity of Charity in Macon (cf. Roman, Vincent de Paul, a biograph, Melisende, London, 1999, p. 143-146). In light of the increase in the number of beggars who moved about the city, what could be done? Vincent brought together civil and ecclesiastical authorities and designed an ingenious plan: (a) take a census of the poor, (b) collect financial funds from various entities, (c) assist the poor according to their need, (d) evaluate the use of resources and the way to make this process ever more effective.

Isn’t this what the world and we are doing? A providential project that is still valid today … and today, sooner or later, as the saying goes, we will leave “this impasse” and then, what is next in the post viral world?

2. Open paths in order to heal the wounds of yesterday and today

Then comes the most arduous and difficult task. There is an uncertainty about the future and looking at the future from a human perspective there are many concerns and worries, Yet, just as unexpected as the virus that entered our homes without permission, so also we are challenged to open new paths. We find ourselves in the midst of wounded and assaulted men and women lying on the side of the road that goes from Jerusalem to Jericho (cf. Luke 10:2-37). If we are true sons and daughters of the Good Samaritan of the seventeenth century, we cannot be unfaithful to the legacy that he has given to us and to those who will come after us.

Here are some steps we can take, if we want to continue to walk in the footsteps of Saint Vincent:

• Give me men and women of prayer and they will be able to do anything (CCD:XI:76). We are not entrepreneurs or social workers rather, by vocation, we are members of the Vincentian Family for whom the underlying motivation is the following of Christ, the evangelizer of the poor. Therefore, we proclaim the good news of the gospel knowing that without the Lord we can do nothing (John 10:5).
• On a personal and community level we may have much or little, but we have something. This is the time of open our coffers that contain new and old gems (cf. Matthew 13:52). Like the disciples, we might only have five loaves of bread and two fish, but in the hands of the Lord these are bountifully multiplied (cf. Matthew 14:13-26).

• Since the time of Father Maloney, we have become more aware of the fact that the Vincentian Family transcends the limits of institutions that were directly established by Saint Vincent or institutions that were closer in history and development by the missionaries and daughters. Now is the time of grace to unite and bring together people and initiatives and resources on behalf of those who are poor.

• If we do not make systemic change operative today, then when? Was this not the reality that occurred in Macon and Chatillon-les-Dombes? Was this not the reality that occurred with regard to the establishment of the Federation of the Homeless of Father Norberto Carcellar (a project which he blesses from his heavenly mission) or Akamasoa of Father Pedro Opeka in Madagascar or the “13 Houses Campaign” which is taking place in many parts of the world.

You and I have a path along which we must journey. Yes, now is a time of grace, a time to listen to the voice of the Lord, a time to open our eyes and see what the Lord is asking of us.

Now, with Father Jean-Pierre Renouard, CM., we conclude by imploring the intercession of our Holy Founder who trusted in Divine Providence and was the faithful follower of the will of God: 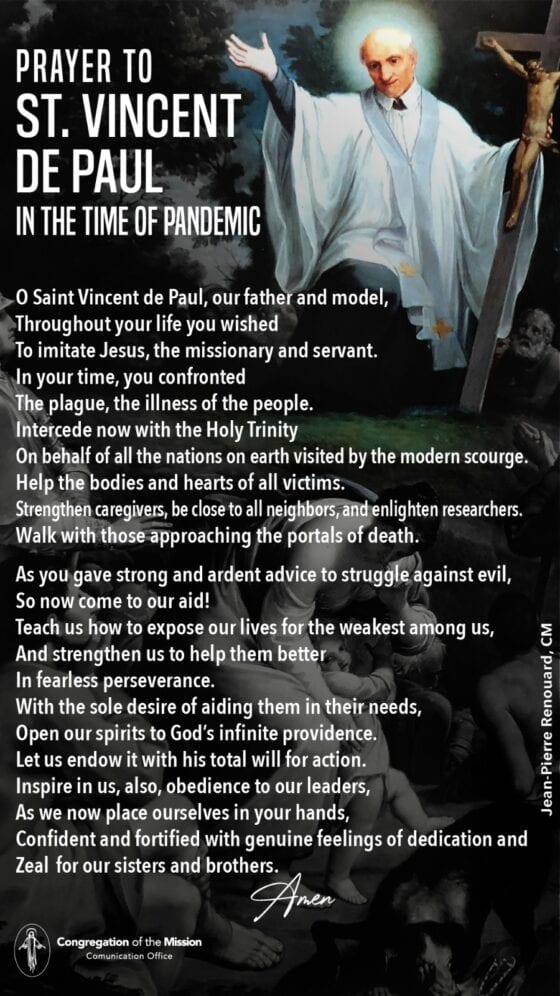