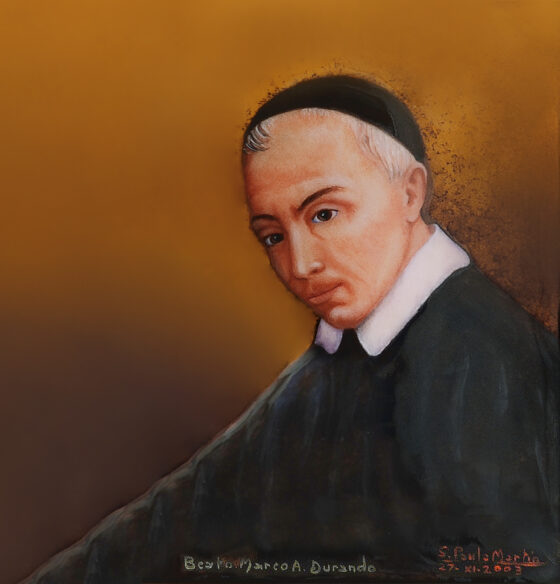 Father Durando lived his vocation to the full as a Vincentian priest (Lazarist). Like M. Vincent, he allowed the Spirit to sanctify him. As Director of the Daughters of Charity he took on courageous initiatives for his time: sending Sisters to treat the wounded in the Crimean War. He had the courage to found a Congregation dedicated to caring for the sick in their homes, the Nazarene Sisters.

Marcantonio Durando was born in 1801 in Mondovì (Piémont) to a distinguished family. His very pious mother brought up the children as Christians while his father had liberal and agnostic ideas.

At the age of 15 Marcantonio had the desire to bring the Gospel to far off lands. He entered the Congregation of the Mission and made perpetual vows when he was 18. He was ordained a priest in 1824. After spending five years in Casale he went to Turin where he lived from 1829 until his death. He had wanted to leave for the missions in China but the delicate health of his mother prevented it. Nevertheless, he shared his zeal in Popular Missions. He preached the mercy of God, inviting the people to conversion. These missions not only included preaching but when he found serious situations of poverty he intervened concretely, with the approval of his confreres, in imitation of Saint Vincent, his model. He supported and promoted the work of the Propagation of the Faith. Shunning the extremes of laxity and rigors of Jansenism Father Durando preached the mercy of God, bringing the populations to conversion.

He pressed for the introduction of the Daughters of Charity in Italy. Father Durando wanted them to come to Piémont and King Charles Albert welcomed them in 1833. They were to assume responsibility in several hospitals, military and civilian. In 1853 he had the courage to send them to the rear front of the Crimean War to nurse the wounded. At the same time he promoted the Marian Association of the Miraculous Medal among young people. In 1837 vocations were so numerous that King Charles Albert put the convent of San Salvario at their disposition in Turin.

With the increased number of Sisters Father Durando started a network of charity centers in Turin called « Mercies ». With the Ladies of Charity, the Sisters went to serve the sick poor in their homes. Diverse works were started around the Mercy centers: the first nursery schools for poor children, workshops for girls and for orphans.

The works of God are unforeseeable. On November 21, 1865, the Feast of the Presentation of Mary, Father Durando confided to the servant of God, Luigia Borgiotti, the first Postulants of the new “Congregation of the Passion of Jesus the Nazorean”. These were young women who had come to him who wanted to consecrate their lives to God but who could not meet the canonical regulations to enter religious communities.