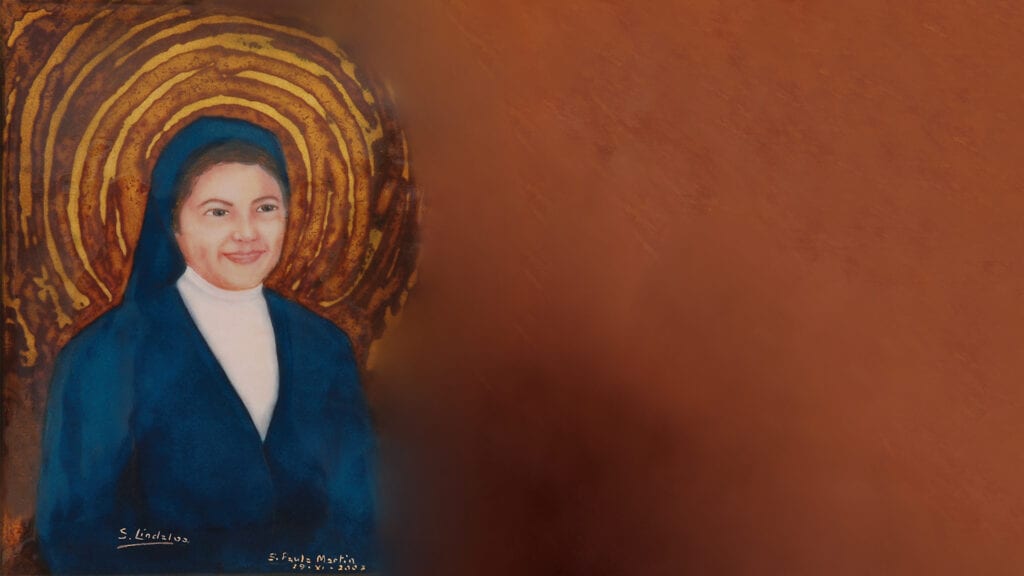 Sister Lindalva was the first woman to be beatified in Brazil. She was still a young Daughter of Charity, 4 years-vocation, when she was martyred. Her fidelity to her vocation and her love for everyone without preferences were so intense that she didn’t hesitate to give her life for them.

Lindalva was born on October 20th 1953 in the town of Açu in North Rio Grande State, Brazil and was the 6th child in a family of 14 children. Her parents, devout Catholics, had a simple and deep faith.

Lindalva received an ordinary Christian education. A generous child, she often helped her mother in the home. Whenever arguments broke out among her childhood companions, she always tried to settle them with gentleness. Attentive to the suffering of others, she would visit people who were lonely or poor in the town; at times she even gave them her own clothes, always in a sensitive and discreet way. Over time, she understood that she was being called to follow Christ by reaching out to poor persons to witness to the Father’s love for them. After completing her studies as an administrative assistant, she took care of her elderly and ill father. After his death, she asked to be admitted to the Company of the Daughters of Charity: “I’m 33 years old; I come from a simple, honest family. I have felt God’s call for a long time but have not been available to serve Christ until now. I am in good health and feel I have endless energy to do good works”.

On 16th July 1989, Lindalva entered the Daughters of Charity in the Province of Recife. Sent on mission in 1991 to the Dom Pedro II Residence in Salvador, Bahia State, she was appointed coordinator for the care of the ill and elderly men.

Sister Lindalva loved the elderly people in her care with a gentle and humble heart: in a spirit of faith, she saw them as her lords and masters: “I ask God to give us his wisdom and gentleness to serve well our masters, those who are poor.” She understood her vocation as a response to God’s will: “When God calls, no one can hide from this call. Sooner or later, God’s will is accomplished.” Her faith was expressed by a simple and complete adherence to life’s events, which she welcomed as a gift and call from God: “Each day of our life should be a day of renewal and thanksgiving to God for the gift of life and the call to follow his Son, Jesus Christ, in serving Him in persons who are poor.” Her generosity of heart enabled her to overcome all difficulties: “In my prayer, I continually feel so great a desire to love our good God that I am sure I will reach that point even if it takes me to the last day of my life to do it.” She knew how to share her faith with other young people and to support her companions when difficulties overwhelmed them: “When our hearts are troubled by doubts about our vocation, we should give ourselves entirely to God.”

“We will come to know God’s love by carrying the Cross.” These words spoken by Sister Lindalva herself have taken on a prophetic meaning.

Energetic, always smiling and available, Sister Lindalva radiated the presence of God; she lived her vocation as a servant of the poor in a spirit of justice inspired by love: she loved each person without favouritism or discrimination.

On Good Friday, April 9th, 1993, Sister Lindalva made the Way of the Cross, together with the Sisters of her local community, at a dawn service with the parishioners. The Cross is the ultimate sign of love given for another person: “Father, forgive them, for they know not what they do” (Lk. 23:34).

When she came back to the house, Sister Lindalva prepared breakfast for the residents as she did each day. As she began her work, she was brutally murdered by a sick, 46 years old man who was in a violent rage: he could not accept that she had repulsed his advances.

This Daughter of Charity certainly did not expect to die at such a young age. Having offered her life, she gave witness by her death that “No one has greater love than this to lay down one’s life for one’s friends” (Jn. 15:13).

The process of beatification was started by popular acclaim. The people were touched by this young Sister’s faith, her service of the poor and fidelity to her commitment that ultimately led to her martyrdom. The beatification took place in Salvador – Bahia, Brazil, on December 2nd 2007, in a huge stadium with nearly 60,000 people present.