THE CONGREGATION OF THE MISSION IS PRESENT IN THE PARISH OF BOGANANGONE, DIOCESE OF M’BAÏKI, CENTRAL AFRICAN REPUBLIC 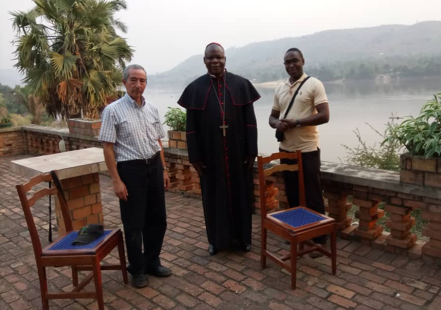 THE CONGREGATION OF THE MISSION IS PRESENT IN THE PARISH OF BOGANANGONE, DIOCESE OF M’BAÏKI, CENTRAL AFRICAN REPUBLIC

Rwanda-Burundi Region of the Province of Colombia

On 7 February 2021, at 8:00 a.m., three confreres from the Rwanda-Burundi Region, Province of Colombia, flew from Kigali, Rwanda to , Central African Republic in order to respond to the missionary call made by the Bishop of M’baïki and approved by the Superior General of the Congregation of the Mission.

The long story of the mission’s preparation was placed humbly in the hands of the Lord, under the protection of the Virgin Mary. In fact, in 2005 our Superior General, Father Gregory Gay, received a letter from a bishop of the Central African Republic, also signed by different branches of the Vincentian Family, requesting the presence of the Congregation of the Mission and the Daughters of Charity in that country. The Superior General’s response was to commit himself to speak about this with the confreres of the Cameroon Region.

In 2012, the Daughters of Charity of the Central African Province responded to this missionary call and sent four Sisters to begin a mission in the M’baïki Diocese. Thanks to them, we had the opportunity to see this diocese’s needs. Our Rwanda-Burundi Region wanted to collaborate quickly in responding to this missionary invitation.

With the agreement and encouragement of the Superior General, the Visitor of Colombia and their Councils, in the context of the 400th anniversary celebration of our Charism, the Rwanda-Burundi Region desired to associate itself with the Vice-Province of Cameroon in accepting the pastoral responsibility of the Parish of Saint Daniel Comboni, Boganangone in the M’baïki Diocese. For this purpose, two young confreres were chosen to work with two other confreres from Cameroon. This missionary adventure started at the beginning of 2017.

During the send-off celebration, our Regional Superior highlighted these points:

This first experience had a lot of difficulties and, in the end, it was interrupted.

Today, after many doubts and difficulties, we respond again, convinced of the M’baïki Diocese’s pastoral needs and of the grace of having received a missionary vocation. The Superior General and the General Curia, as well as our Visitor and his Council, support this commitment. There is no doubt that the fact that a Region as small and limited as ours is giving this missionary response, however small, is already a gesture and an expression of our Christian and Vincentian identity. We do so in the context of the 150th anniversary of the arrival of the first Vincentians in Colombia. The fact that, despite the delay due to the pandemic and the war in that country, the trip was possible on Blessed Rosalie Rendu’s feast is not without meaning.

Our Regional Superior, Father Néstor Gómez, has committed himself body and soul to the realization of this mission and accompanied us on the journey and the beginning of the mission. Fathers Innocent Nshimiyimana and Juan Ávila will go to a parish of the M’baïki Diocese for a period of two months in order to begin to get used to the language, culture, and pastoral work before going to the Saint Daniel Comboni Parish in Boganangone, which the Bishop entrusts to the Congregation of the Mission.

We confide ourselves to your prayers so that we may know how to follow Jesus Christ, evangelizer of the poor, under the Virgin Mary’s protection and at the school of Saint Vincent, seeking to love from now on the brothers and sisters whom the Lord has wished to give us in this country.