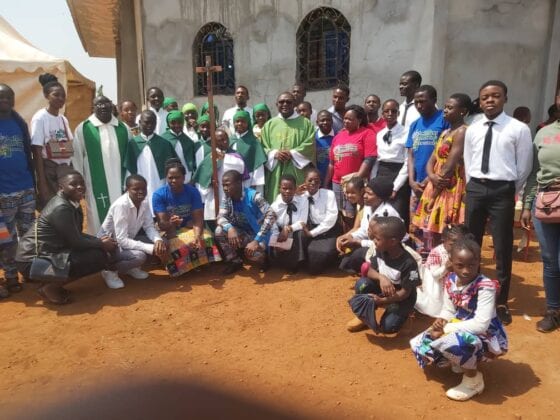 Diocese of Bafoussam, Parish of Saint
Boniface of Kyenengo

After an interval of many years, the Vice-Province of Cameroon renewed its ministry of popular missions. From February 1-7, a popular mission was given in the parish that is administered by the confreres and that is localed outside the city in the Diocese of Bafoussam. On the sociological, economic and religious level, the people are members of traditional religious groups, Catholic and Protestant. People earn a living through farming and the operation of small businesses. Very few middle would be viewed as middle-class. There are many retired people and many students are engaged in their primary and secondary education. Students, however, when studying at the university or engaged in some form of professional study, leave this area.

Several branches of the Vincentian Family particitpated in this ecclesial, spiritual, social and Vincentian event: the third year philosophy students from Saint Vincent de Paul Seminary, members of the Congregation of the Mission, a diocesan priest, members of the Company of the Daughters of Charity, members of the Vincentian Marian Youth, and many other volunteers and friends who work in the various hospitals and non-governmental agencies. The theme of the mission was based on John 8:36: if the Son sets you free, you are truly free. During the course of the week, we invited people to reflect on the chains that enslave them (and to do so from the perspective of faith and reason, from the perspective of the slavation of their body and soul).

Three key elements of this mission. First, the time of preparation with the pastor, the Pastoral Council, the Financial Council, the various confraternities and ecclesial base communities. This provided us with an opportunity to explain the mission through meetings and formation material. We were able to mobilize people so that they became true collaborators during the mission. Second, the mission itself which was carried out in accord with the plans that had been established. There was a certain flexibility with regard to the time for different scheduled events. Finally, the time of evaluation which enabled us to view the manner in which God had acted during the time of the mission. We were also able to share our experiences, identify areas of success and areas that could be improved in order for the fruits of the mission to become every more productive.

Day after day, the participants were exhorted to respond to the question: what do you want to be freed from? People were invited to enter into a personal liberating encounter with the Crucified and Risen Christ through reception of the Sacrament of Reconciliation and the Eucharist, through the house visits of all the parishioners, the various conferences that were based on problems and questions presented by the faithful, catechesis grounded on biblical texts and presented visually and dramatically by the seminarians and the youth of the parish, prayer, workshops on rosary making, times for praise and adoration, medical attention (hypertension, diabetes, hepatitis B and C, depression, dental, eye examinations, etc.).

In the gospel of Matthew we read: give as freely as you have received (Matthew 10:8). Those words came to life during the popular mission, especially on the medical level. All of the medical, dietary, and health professionals provided services free of charge. When some people were unable to buy the medications that they needed, financial assistance was provided. Other people offered to provide housing and food to the seminarians during the eight days of the mission, thus fullfilling the words of scripture: if you enter a town and it welcomes you, eat whatever is set before you (Luke 10:8).

In the cold and walking on foot, the seminarians, priests and other Vincentian volunteers went from house to house proclaiming the liberating message of Christ. Some people closed their doors and other opened not only their doors but their hearts and thus created a spirit of dialogue and listening.

A very enriching experience was the workshop on making rosaries. Children from age 7-12 participated in this activity that was sponsored by the members of the International Association of Charity. Boys and girls learned how to make rosaries and also leanred how to pray the rosary. These rosaries were then presented to the priests who blessed them. Slowly and especially in the afternoons, other young men and women participated in this workshop that went on throughout the day (from morning to evening).