COVID-19 in Brazil and the Geography of Human Suffering 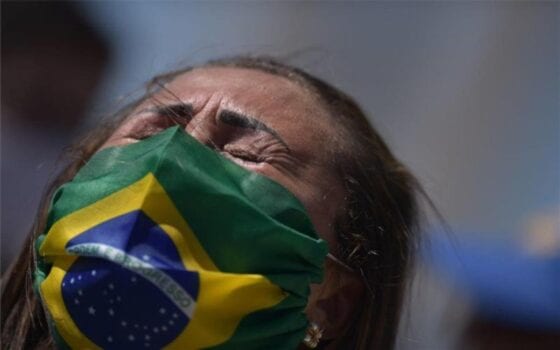 All I can say is that on this earth there are pestilences and there are victims (Albert Camus. The Plague).

Etymologically the word pandemic means all the people. The new corona virus, which has caused thousands of deaths throughout the world, has not only revealed its degree of lethality, but has also deepened inequalities in Brazil. There are many reasons that enabled the pandemic to establish “permanent chaos” in the country. Among the many elements, we mention the following: the denial and intellectual ignorance of the president elect, the large group of so-called self-employed workers or street vendors who depend on “the street” in order to survive, the deplorable reality of housing in the suburbs and in the favelas surrounding the large urban centers, the precarious situation of public transportation as a result of overcrowding, a health system that was already malfunctioning before the pandemic, the rapid growth of poverty and the prevalence of neoliberal thinking about the social rights of the poorest members of society. President Jair Bolsonaro views the economy as an untouchable “golden calf” that must continue to function even if that means functioning on the mounds of dead bodies scattered across the four corners of the country.

If in the next twenty-four hours, the country exceeds the moving average of more than 2,000 deaths as a result of COVID-19, we will have set a new world record. Under these conditions, Brazil has become the “cemetery of the world”.

Here the virus has undergone a metamorphosis: it has allied itself with the extreme right and has become spiritualized in reactionary Christianity … it has also made use of the political polarity that has transformed Brazilian society into a scene of war, a media horror show. The inequality that has surfaced as a result of the health crisis reveals to the world a country that has done nothing to relive the suffering of the poor and that has a total disregard for human rights.

Quarantine, as a preventive measure in the fight against COVID-19, is an ineffective strategy in Brazil. One must understand that the poor are forced to go out and find what they need to survive on the street. According to the research done by the Brazilian Institute of Geography and Statistics, 68% of the workers were part of the informal market during the second quarter of 2020. This data reveals that only a very small number of people can live in a situation of “luxury quarantine” because they have a good house, healthy food, and a monthly income that is unmatched by the vast majority of Brazilians.

“Emergency assistance” does not satisfy hunger, nor does it pay the debts of the unemployed because it is temporary assistance that is designed to alleviate the cost of living.

According to the neoliberal doctrine, the poor only need crumbs. According to Social Darwinism, people who are unable to adapt to the market must be sacrificed. The economy must prevail like the sun in the galaxy … the State and the human community must orbit around them and, at any cost, must submit to their laws. The market is like a virus that acts and regulates everything with an “invisible hand”. Since the market is also devastating to the balance of forces operating within its interests, the neoliberal economy also kills. The pandemic has revealed the heights of this dehumanized financial model. Despite its cruelty, the pedagogical function of the virus is to reveal the pathologies that generally remain hidden behind the arrogance of technological progress and the illusion of human omniscience which is almost always supported by economic power.

In general, the media present a narrative that is focused on the person of the denialist president who opposes science. As the media attempt to be faithful to their social responsibility to inform the public, they must also raise questions about the terrible conditions of the poorest, that is, those men and women who have to confront the uncontrollable factors of this tragic reality … and have to confront those factors alone. These same factors contribute to the fact that the Beloved Country of Brazil continues to push its children toward the dark valley of death and as a result, is becoming the epicenter of the world health crisis. For the poor there is neither the vaccine nor the salvation that is being preached by the “political messianism” in Brasilia! For those who have not died, desperation awaits them … that is, despair awaits them!

COVID-19 has found the perfect geopolitical situation in which to live and proliferate here in Brazil. The new coronavirus wanders about freely and moves hand in hand with the most notable manager in the country who has graciously dubbed it “a simple flu”.