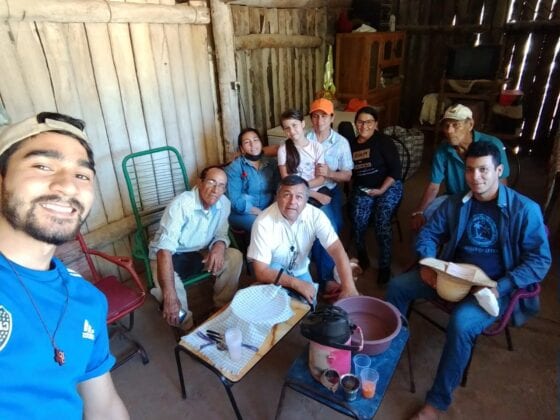 On Friday, March 26 this year, the mission teams made up of Vincentian and Carmelite Priests, Vincentian and Carmelite Seminarians and the Daughters of Charity left for the Paraguayan Chaco to celebrate Holy Week in four communities: Ninfa and Gral, Brugués (the Parish of St. Librada), Fortín Caballero and Esteban Martínez (the Vicariate of Our Lady of Fatima) in the Diocese of Benjamín Aceval.

Each mission team, when they settled in their respective communities, made arrangements of how the mission would be carried out, taking into account the restrictions placed by the Paraguayan government due to the COVID-19 virus contagions.

On Sunday, March 28, in all communities the celebration of Mass and the blessing of the palms opened the mission. In Fortín Caballero community, where the Police Chief was very strict with the restrictions, few parishioners took part in the celebration. As a gesture of communion on this important day for the Catholic faith, little crucifixes made of blessed palms were made and taken to the families in their homes.

On Monday 29, we visited families and blessed houses in the morning, and in the afternoon in some communities we held meetings with children, young people and adults. The same dynamic continued until Holy Wednesday. On this day, Holy Wednesday, it is a tradition in Paraguay to prepare the Chipa (a kind of bread made of corn flour, manioc flour, egg and cheese), all the mission communities joined the families in the cooking of this traditional food.

On Holy Thursday morning we continued what we had been doing in the previous days and in the afternoon the Lord’s Supper Mass was celebrated. On Good Friday in some communities there was a meeting with the people to watch the movie (The Passion of Christ). There were celebrations of the Passion and the Stations of the Cross, which in some places were performed by young people from the pastoral centers.

In the morning on Holy Saturday the visits to the houses continued. In the afternoon the Easter Vigil was prepared and in some of the communities they organized meetings for the youth. The parishioners participated in the celebration with great enthusiasm. They were involved in the preparation of the blessing of the fire, they carried candles and water with devotion and one could feel the joy of living the Vigil, which for many was the first experience as, due to the lack of ordained ministers, this celebration had never been held in their communities.

It was observed during this mission there is a great shortage of assistance in these communities. They have very basic catechesis (no training for catechists); they lack formation and didactic materials for catechists and catechized people. In the areas of education and health, we have seen a great neglect of the inhabitants in these places by the national and local governments, as the schools do not have books for reading and the health centers have almost no supplies, not even for first aid.

Following this beautiful experience, we will continue working as the Vincentian Family of Paraguay and in collaboration with the Carmelite Fathers, to give continuity to the initiated pastoral tasks.