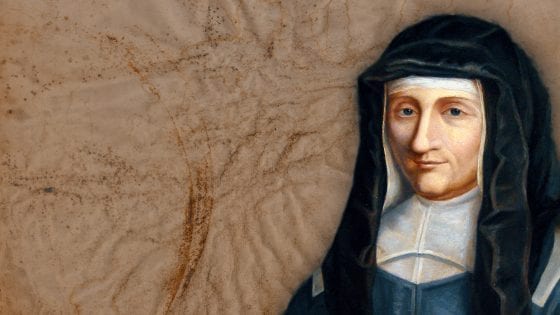 Louise de Marillac engaged in a tireless search for God. She was a member of the Marillac family, one of the more influential noble families of seventeenth century France. From the time of her baptism (August 12, 1591), Louise’s father recognized her as his child. At a very young age Louise was brought to the house of the Dominican Sisters at Poissy. When her father died in 1604, she left the house of the Sisters and began a search for God. She wanted to be a religious, but her family guided her toward marriage. In February 1613, she married Antoine Le Gras, secretary of the Queen, Marie de Medici. She gave birth to her only son, Michel-Antoine and her husband died when her son was twelve years old … thus, in 1625 Louise became a widow with an adolescent son and few resources. She suffered greatly and found little consolation. The prolonged illness of her husband placed her in a precarious situation: doubts of faith, doubts about the existence of God, lack of resources, weariness, concerns about her son, rejection and indifference on the part of the members of the Marillac family. She felt as though she was drowning in a sea of confusion and found no meaning in life. She also felt as though she had been unfaithful to the religious calling which she experienced during the time of her youth and viewed her present situation as a form of punishment for her infidelity to her promise.

On June 4, 1623, in her search for God, she entered the Church of Saint-Nicolas-des-Champs and asked for enlightenment … and the light of the Holy Spirit filled her. Her doubts and uncertainties with regard to her faith disappeared. Also, her concerns about a spiritual director were resolved and she saw that God had led her to Vincent de Paul. Finally, in this light of Pentecost, Louise received the inspiration to found the Company of the Daughters of Charity: I was assured that a time would come when I would be in a position to make vows of poverty, chastity and obedience and that I would be in a small community where others would do the same. I then understood that I would be in a place where I could help my neighbor but I did not understand how this would be possible since there was to be much coming and going. The impact of that experience was so great that Louise wrote about that event in a notebook and entitle the writing: The Light of Pentecost.

At that time, Divine Providence placed Vincent de Paul in her path, and he would become her confessor and spiritual director. The initial encounter took place in the area around the parish of Saint-Nicolas-des Champs. Vincent had just established the Congregation of the Mission in order to evangelize the poor country people. In 1617 he had also established the Confraternities of Charity, the fruit of the popular missions that he preached. During those missions Vincent was concerned about evangelizing the poor, uniting families and responding to the urgent needs of the infirm (the victims of epidemics and famine), the galley slaves, orphans, beggars, the elderly…

Louise, the widow of Antoine Le Gras, had a restless, adolescent son, Michel-Antoine. She allowed herself to be guided by Vincent in those matters related to the education of her son. She also dedicated herself to the practice of charity. She wrote her Rule of Life in the World and harmonized piety with charity and catechesis. She knew how to live the three pillars that sustain the church, namely, worship, catechesis and charity. From the time of 1625 the activities that involved worship, catechesis and charity would sustain her life.

Visitor of the Confraternities of Charity: Louise experienced the need for consolation, guidance, as well as human and spiritual support. Louise and her spiritual director had both experienced powerful doubts of faith and were very aware of human frailty … and both attempted to be faithful to God’s plan for their lives. Vincent, as her spiritual director, provided Louise (and her son) with guidance and offered her understanding, direction and consolation. He discovered that Louise was very sensitive with regard to her relationship with God and the manner in which she dealt with those who were poor.

On May 6, 1629, Vincent sent Louise forth as a missionary and, in a letter, focused her life on charity: Go, therefore, Mademoiselle, go in the name of our Lord. I pray that his divine goodness may accompany you, be your consolation along the way, your shade against the heat of the sun, your shelter in rain and cold, your soft bed in your weariness, your strength in your toil, and, finally, that he may bring you back in perfect health and filled with good works. Louse set out immediately … and May 9th marked the beginning of her first missionary journey.

When Louise arrived in the various towns and villages, she would first contact the pastor and then gathered together the members of the Confraternities. She went with them to visit the infirm and observed how they attended those persons who were ill. She pointed out those things that were not functioning well and offered suggestions and encouraged the women in their ministry. In 1630, Louise began to form young women as teachers, and she established parish schools to teach girls how to read and write while at the same time teaching them the catechism and educating them in gospel values. In her goings and comings, Louise met some young women who experienced a call to serve those persons most in need … the first one being Marguerite Naseau. Therefore, together with Vincent de Paul, Louise founded the Daughters of Charity on November 29, 1633.

Louise became the founder, the formator, director, superior and spiritual animator of the group. She redacted the first Rule and with Vincent de Paul wrote the Rules for the Daughters of Charity. At the time of her death, Louise handed over the Company with solid spirituality and a firm mission: to continue the mission of Jesus Christ and to serve Jesus in the person of the poor.