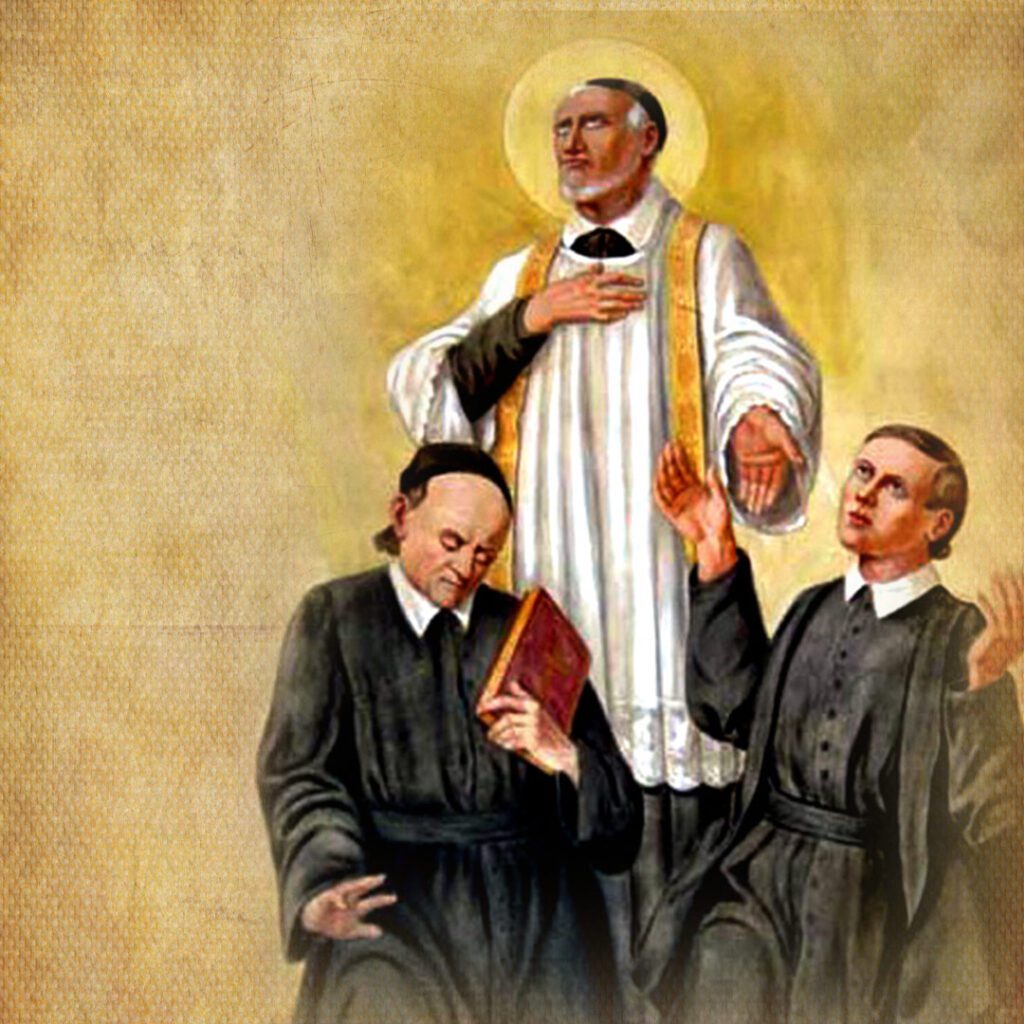 Blessed Louis-Joseph François, (1751-1792), was born on 3 February 1751 in Busigny (France). Educated by the Jesuits, he felt called to religious life. He was no more than 15-years-old when he joined the Sons of Saint Vincent de Paul in the Motherhouse of Saint-Lazare in Paris. He was ordained a priest in 1773 and, in 1788, was appointed Superior of the Seminary College of Saint Firmin in Paris, the college “des Bons Enfants.” Although times were difficult, he ensured that the seminary continued regular life. He wrote several pamphlets against the Civil Constitution of the Clergy, including one entitled Apologia. When the persecution already was raging, he opened the doors of the Saint Firmin Seminary in Paris to more than 90 priests and religious. When the house was invaded by the assailants, Blessed Louis-Joseph François was taken and thrown from a window. On the ground, he was then beaten and his corpse, like that of the others, was cruelly desecrated. It was 3 September 1792.

Blessed Jean-Henri Gruyer, (1734-1792), was born on 13 June 1734 in Dole (France). Following God’s call, he was ordained a priest in Saint Cloud and settled in his hometown. Aspiring to perfection, when he was 37-years-old, he decided to join the Sons of Saint Vincent de Paul. He was assigned to Argens. Appointed vicar of Our Lady of Versailles, he moved in 1794 to the parish of Saint Louis, where he was surprised by the Revolution. Expelled from the parish for refusing to take the civil oath, he returned to Paris where the Seminary of Saint Firmin opened its doors to him and where he died on 3 September 1792, sharing suffering and martyrdom with Blessed Louis-Joseph.

Blessed Nicolas Colin, (1730-1792), was born in Grennat, Haute-Marne (France) on 12 December 1730. He took his vows in the Congregation of the Mission in 1749. For 22 years he carried out his missionary ministry with a reputation as a good preacher. The Revolution expelled him from his parish for refusing to take the civil oath. He fled to Paris where he met the death of the martyrs in the cruel massacre of 3 September 1792.

Blessed Jean-Charles Caron, (1730-1792), was originally from Auchel, Pas-de-Calais (France) where he was born on 31 December 1730. He made his vows in the Congregation of the Mission in 1752. For 29 years he devoted himself to mission ministry, later becoming pastor of Colegien, Diocese of Arras. Like many others, he refused to take the civil oath, for which he was expelled from his parish, and took refuge in Paris, His death was joined to that of the martyrs of the cruel massacre of 2-3 September 1792.

Blessed Pierre-René Rogue, (1758-1796), was born in Vannes on 11 June 1758. He took his vows and entered the Congregation of the Mission on 26 October 1788. In his native Brittany, he dedicated himself to helping persecuted Catholics until he was arrested while taking Communion to a sick person on Christmas Eve 1795. He was taken to prison on the same day, 24 December, and remained there until the following 3 March. He was condemned to the guillotine. At the end of that iniquitous trial, he was brought back to prison from where he wrote his last letter to his elderly mother and to his confreres in Community, telling them that he was going to die for the faith and that in those moments he felt happy and content to give his life for Christ. There were several attempts to get him out of prison, while he spent the night in prayer and helping those who, like him, had been condemned to death. He was guillotined on 3 March 1796, before the eyes of his elderly and saintly mother.

A miracle attributed to their intercession must be presented for the canonization of these our Blessed.

Prayer to obtain the canonization of Blessed Louis-Joseph François and Companions:

O God, with love for Your Church you have bound Blessed Louis-Joseph and his companions to Yourself, enriching them with invincible strength in defending her freedom. We pray that the Church may soon recognize them among the ranks of her Saints, so that through their example and intercession we may learn to love the Church as our mother and to proclaim with evangelical strength Your word of truth and justice. Through their prayer and intercession, grant us the grace … that we hope so much from You, if this be according to Your will. We ask this through Christ Our Lord. Amen.