Pact of the Catacombs for the Common Home

For a Church with an Amazonian face, poor and servant, prophetic and Samaritan

We, the participants of the Pan-Amazon Synod, share the joy of living in the midst of numerous indigenous peoples, “quilombolas,” inhabitants of riverbanks, migrants and communities in the peripheries of the cities of this immense territory of the planet.  We have experienced with them the strength of the Gospel that acts in the poor.  The encounter with these peoples challenges us and invites us to a simpler life of sharing and gratuitousness.  Marked by listening to their cries and tears, we heartily welcome the words of Pope Francis:

“So many of our brothers and sisters in Amazonia are bearing heavy crosses and awaiting the liberating consolation of the Gospel, the Church’s caress of love.

For them, with them, let us journey together.” 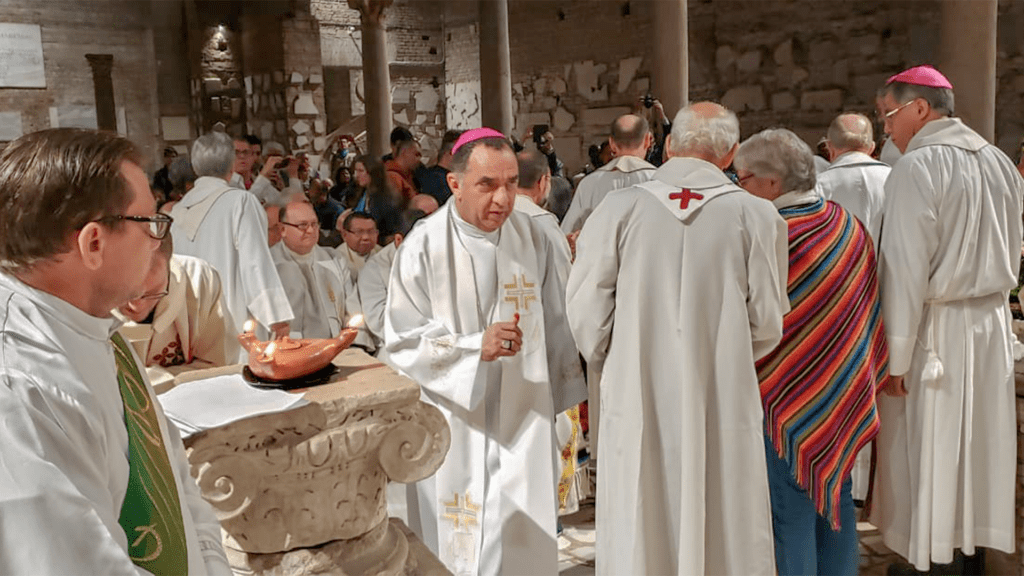 We recall with gratitude those bishops who, in the Catacombs of Santa Domitilla at the end of Vatican Council II, signed The Catacombs’ Pact of the Poor and Servant Church.  We remember with veneration all the martyrs that were members of the base ecclesial communities, of pastoral and popular movements; the indigenous leaders, missionaries, lay people, priests and bishops, who shed their blood for this option for the poor, for defending life and fighting for the protection of our Common Home. We join in gratitude for their heroism with our decision to continue their struggle with tenacity and courage.  It is a feeling of urgency that prevails in the face of aggressions that today devastates the Amazon territory, threatened by the violence of a predatory and consumerist economic system.

Before the Holy Trinity of our particular Churches the Churches of Latin America and the Caribbean, and those who stand in solidarity with us in Africa, Asia, Oceania, Europe and on the continent of North America, and at the feet of the apostles Peter and Paul and the multitude of martyrs of Rome, Latin America and, especially, of our Amazon, and in deep communion with the successor of Peter, we invoke the Holy Spirit and we commit ourselves, personally and communally, to the following:

Aware of our fragility, of our poverty and smallness in the face of such great and serious challenges, we commit ourselves to the prayer of the Church.  That, above all, our ecclesial communities help us with their intercession, their affection in the Lord and, when necessary, with the charity of fraternal correction.

We welcome with an open heart the invitation of Cardinal Hummes to allow ourselves to be guided by the Holy Spirit during these days of the Synod and upon the return to our churches:

“Allow yourselves to be enveloped by the cloak of the Mother of God, Queen of Amazonia.  We must not allow ourselves to be overcome by self-referentiality, but by mercy when faced with the pain expressed by the poor and the earth.  We will need to pray a great deal, to meditate and discern a real practice of ecclesial communion and a synodal spirit.  This Synod is like a table that God has prepared for His poor and He is asking us to serve at that table.”

We celebrate this Eucharist of the Covenant as “an act of cosmic love.” “Yes, cosmic!  Because even when it is celebrated on the humble altar of a country church, the Eucharist is always in some way celebrated on the altar of the world.” The Eucharist joins heaven and earth; it embraces and penetrates all creation.  The world that came forth from God’s hands returns to him in blessed and undivided adoration: in the bread of the Eucharist, “creation is projected toward divinization, toward the holy wedding feast, toward unification with the Creator himself.”     Thus, the Eucharist is also a source of light and motivation for our concerns for the environment, directing us to be stewards of all creation”