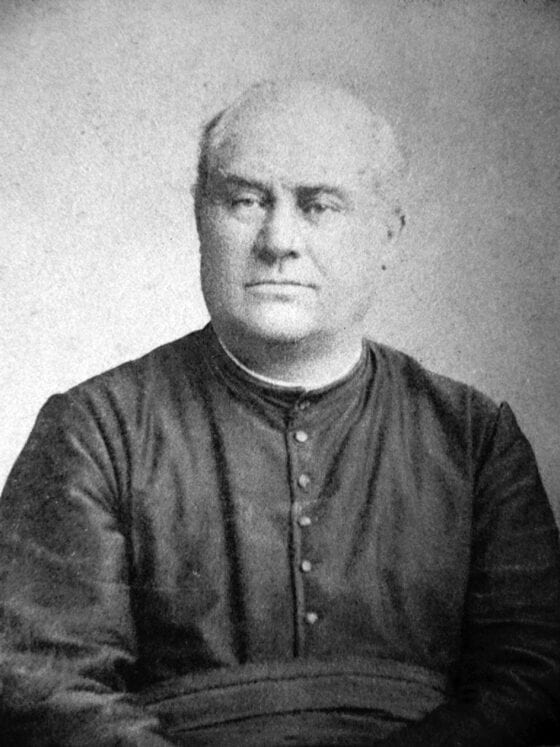 Throughout these 200 years of Vincentian presence in Brazil, many priests had great impact, leaving marks on the two centuries of history. Among them is the French priest, Pierre-Marie Bos, known to the Brazilians as Father Pedro Bos. According to Father Omar Raposo, current rector of the Sanctuary of Christ the Redeemer: “To this day Father Bos is considered a great mystic by everyone in the Archdiocese of Rio de Janeiro. There is even thought of opening his Beatification process.” But, after all, who was Father Pedro Bos?

Ordained a Vincentian priest in 1858 in Paris, he came as a missionary to Brazil the following year, landing in Rio de Janeiro in 1859. In Brazil, he held many offices, among them: Chaplain of the Holy House of Rio de Janeiro, missionary in Bahia, chaplain of Immaculate Conception School, professor and later superior of the school in Caraça, and Provincial Treasurer. For the last 20 years of his life, he engaged in intense intellectual activity, producing various prefaces for spirituality books, translating the Gospels and the monumental work of Miguel de Cervantes, Don Quixote.

While residing at the Immaculate Conception School on Botafogo Beach, looking out over the Corcovado Hill from his window, he imagined it as a huge pedestal, the perfect place for the construction of a statue in honor of Our Lord, which from above, according to his mystical vision would bless the Brazilian lands. Father Bos even requested financial assistance from Princess Isabel (heiress of the Brazilian Empire) for the project. Several times the princess showed interest in the project, looking for ways to achieve it, but her plans were discarded in 1889 with the Proclamation of the Republic and the separation of Church and State.

Despite his advanced age and some illnesses that afflicted him in the last years of his life, Father Pedro Bos never gave up on his dream. Proof of this is what he wrote in the preface of The Imitation of Christ, in 1903, the famous poem in which he records his vision of a monumental statue of Jesus on the top of the Corcovado:

There rises the stone giant, craggy, towering, and sad,

as if questioning the immense horizon – When will it come?

I have been waiting for so many centuries! Yes, here is the only pedestal in the world.

When the statue comes, like me, the colossal image of Who made me?

… Awake quickly, rise up on that summit the image of Jesus the Savior.

– There goes my humble cry,

God give you an echo all over Brazil.

… For reasons not all, but several will read the Book;

whereas in all languages and dialects the image

will tell the great and the small, the wise and the illiterate, everyone:

I am the way, the truth and the life.

Father Bos died in 1916, 82 years of age, 60 of vocation, having lived for 57 of them in Brazil. He did not even contemplate his vision of the statue, as the process of building Christ the Redeemer began in 1921 and was completed only ten years later. In the Book of the Confreres of the Congregation, Father Pedro Sarneel defined Father Bos quite assertively as an “intelligent and hardworking priest.” It does not hurt us to add that he was also a man of intense spirituality and a tenacious dreamer, a true mystic, who marked the history of Rio de Janeiro and Brazil by imagining the Christian-Catholic monument listed among the seven wonders of the modern world.