The Revolt of the People of Chile

As reported by the media, an unprecedented revolt has recently occurred in Chile.

A rise in the price of public transportation was the final trigger for this demonstration of outrage, revealed in an unwillingness to accept any more abuse. It was the high school students, students of the National Institute (the main high school in the Capital), who called for a “mass rejection” of the increased fare. Others quickly joined them: university students, workers, homemakers, professionals, and citizens in general. 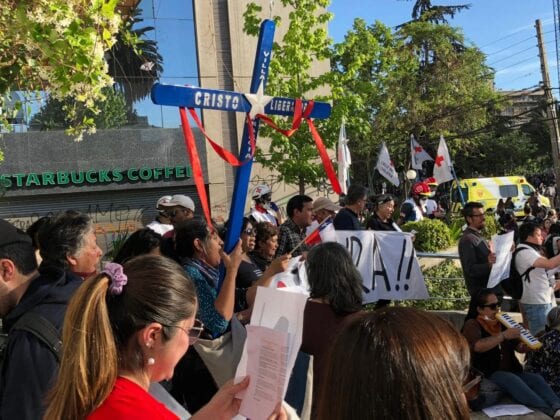 The police presence, trying to prevent this protest, provoked an angry reaction from the protesters, some of whom began to destroy part of the Metro facilities.

It was then that massive groups of people began to take to the streets to demonstrate, not only against the increase fare for public transportation, but to cry out against all the abuses inflicted upon those who view themselves as victims of unjust structures: low wages, miserable pensions, abuse, inequality, lack of access to health care and education. People protested the collusion of large companies and corporations who made a decision to raise the prices for essential products and as well as the appropriation of essential services (such as water) by private entities and the government’s obsession to legislate on behalf of the wealthiest sectors of society while continuing to neglect the most vulnerable people.

People went out into the streets to demonstrate, mostly in a peaceful manner, but as always, there were those who took advantage of the situation and thus, destroyed whatever they found in their path. That provided the government with a perfect excuse to speak about violence, destruction, and criminals while ignoring the real reasons for the protests.

Little by little, however, the authority began to be surpassed, and the city of Santiago became a true battlefield. Friday night, 19 October, there was terror in many sectors of the capital. The authorities reacted by decreeing a state of constitutional exception and brought the military into the street, entrusting them with the task of restoring order

The next day, when many people thought that the worst was over and that the threats of the authorities and the presence of military in the streets had halted the protesters, the reality proved to be quite distinct. From early on, people returned to the streets and more and more people joined the protesters. It was a second day of mass protests, peaceful in origin, but accompanied by the violent action of a few.

Despite the presence of the military and the power granted to them, there was again destruction of public and private property, including the burning of Metro stations, buses, and buildings and the looting of supermarkets and other businesses.

Faced with this unsustainable situation, the government began to yield and announced the suspension of the increase in public transportation. The President began to speak in a more moderate and conciliatory tone. Later, however, the head of the military forces decreed a curfew for that night. Since protests had broken out in other cities of the country, this curfew was to be enforced first, in the larger cities and then in other places.

These demonstrations of force further inflamed the population and the second night was worse than the first. In many sectors of Santiago, people continued to take to the streets during the night. Surprisingly, in Santiago and in other principal cities of the country, at a time when everything was supposed to controlled as a result of the curfew and the presence of the military, there were lootings, destruction, and fires.

On Sunday, the 21st, nobody rested. People had to stock up on food, fuel, and other items. However, supermarkets and service stations were closed, for the most part. It was necessary to travel long distances and to several places in order to find some bread or fuel. In the afternoon, people went out into the streets again. In some places, large numbers of people demonstrated in a peaceful and orderly manner and in other places there was violence and destruction.

At noon, the president met with representatives of the Legislative and the Judicial branches of government. At the conclusion of the meeting, conciliatory words and a commitment to solve the problems were the content of the statements to the press. Nevertheless, in the afternoon, new areas were declared to be in a state of emergency and new forceful measures were decreed: in Santiago there would be a curfew, starting at 7 pm and in other cities, at 8 pm. However, when that time arrived, people gathered on a massive scale in various places in Santiago and in many other places throughout the country, defying repressive measures by the government and the military forces.

At night, the president used harsh language once again and spoke about crime and vandalism, which certainly had occurred, but which was not the attitude of the majority of the people. The destruction is abundant, to the point that when contemplating our cities it would seem that we are suffering the consequences of another earthquake, such as those that so often destroy this country.

It has been 20 days since the beginning of this social outbreak. Although the government has added, to the suppression of the rise in subway tickets, the promise of a series of social measures, such as the increase in the minimum wage and in the lower pensions, and others, citizens have felt that these promises, in addition to being late, are not enough. Their announcement, far from calming the protests, has sharpened them.

Furthermore, the constitutional state of emergency led to excesses on the part of the police and the military, who have clearly violated human rights, through arbitrary detentions, torture, sexual violence, and deaths of demonstrators. The National Institute for Human Rights has reported hundreds of cases and alerted international bodies. Several delegations of international agencies, specialized in these matters, are currently in the country.

The government had to give in again, lifting the states of constitutional exception and making a partial change in the Cabinet of Ministers. However, the population receives all the measures with skepticism, because they are clearly insufficient. The feeling is that the government is only trying to wear down the people and not make any profound changes.

Every day there are demonstrations, marches, peaceful protests and others not so much. However, the greatest demonstration of citizen discontent was the march on Friday, 25 October, that gathered about one million three hundred thousand people in the capital. It was repeated in practically all the cities of the country, so they think the total number of protesters, nationally, bordered on three million people.

Little by little, the conviction has grown that the profound solution is the change of the Constitution. The current one was drafted and approved during the dictatorship, without citizen participation and endorsed in a clearly fraudulent referendum, held without electoral records and without the slightest guarantee of freedom to vote. This Constitution contains, in itself, rules that prevent its replacement or modification in essential matters, and it is also the legal framework that enables and guarantees the full range of abuses which are being claimed today.