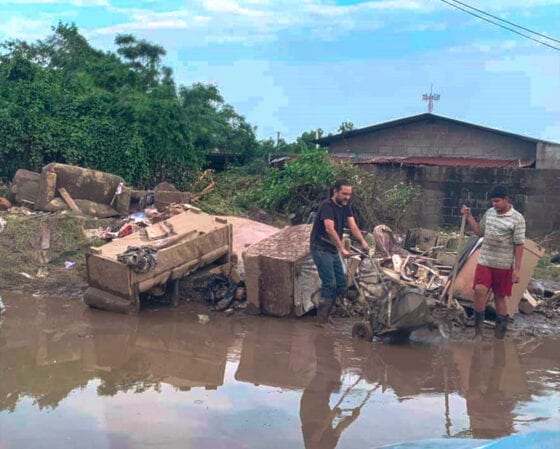 On Monday night, 16 November, this powerful, category 5 (the maximum), hurricane made landfall on the Caribbean coast of Nicaragua, almost at the same point that Eta did. Already that day our territory began to be affected, especially the area of La Moskitia, on the border with Nicaragua, which is served by the Vincentian Fathers from the San José Parish, based in Puerto Lempira. Rain and wind have affected the whole area of La Moskitia, but the most worrisome part is the municipality of Villeda Morales, also known as the “Recovered Zone.” It is a rather isolated area, connected only by canals and lagoons, with which there still has been little communication due to the fall of the cell-phone tower.

In the area of the Sula Valley, where the Saint Vincent de Paul Parish is located, the night of Tuesday, 17 November, was the most delicate moment, because the accumulation of the rain that already had fallen announced a strong swelling of the Ulua and Chamalecón rivers. Thousands of people were forcibly evacuated from their homes and waited in the various shelters. The floods arrived, filling almost the same low-lying areas as before, and bringing a new layer of mud to the houses and streets that already were being cleaned up from the previous hurricane: start over! However, we must be thankful that fewer people were trapped or killed, due to the mass evacuations that, this time, were carried out.

In the rest of the country, heavy rains damaged some areas that had been spared by Eta, but that fell within the scope of the new hurricane: thousands of hectares of flooded crops, agricultural facilities destroyed, hundreds of houses affected, landslides and potholes damaged the country’s main axes roads. In fact, it is currently not possible to travel from San Pedro Sula to the capital Tegucigalpa in the south or to the city of La Ceiba in the north.

As they say, “It never rains but it pours.” However, there is something that the winds and the rain have not been able to destroy; that is, the full confidence we have that, with the solidarity of many and the help of God, we can move forward, even if it involves great sacrifice on the part of all. At this time, let us remember and try to put into practice, once again, the words of the Gospel:

“Everyone who listens to these words of mine and acts on them will be like a wise man who built his house on rock. The rain fell, the floods came, and the winds blew and buffeted the house. But it did not collapse; it had been set solidly on rock (Matthew 7:24-25).