Coming to us, she opened her hands to us

Modern biblical scholars show us that Jesus’ activity is supported by the employment of “gestures”: Gestures go beyond words… they do not ask for the gift of speech, which is held by public speakers and politicians in their squares. The hands can heal or hurt, caress or strike, embrace or reject.

THE HANDS OF JESUS

They are strong and vigorous as a good carpenter, but at the same time are tender to caress children, extended to open the scrolls of Scripture and soft to write on the sand, hands that break bread and bless, hands that heal and resurrect the dead, hands that express anger at merchants, and sweets to care for the sick, hands raised to heaven to pray, hands that instill mercy, tenderness, and love in preaching, and if that were not enough, hands nailed to the cross as if the the world would like to bind them forever, thinking of putting an end to all their works. With his hands pierced by the nails, something glorious happened: The power and hand of God conquered death! His hands are alive with the resplendent wounds of the resurrection, which today from heaven continue to bless, break bread and sustain the redeemed world with his Precious Blood.

THE HANDS OF MARY

If the Gospels are clear when they speak of the hands of Jesus, the same is not the case with the hands of Mary! They leave everything to our imagination, they don’t say anything, but they could. We manage to glimpse some features, which I dare to mention with fear, but with the hope that they are not misguided, and might be light for us.

Mary, as a woman of our own flesh, was born, grew up and was formed in the darkness of her home, and as a good Jew, she learned the Aramaic letters in her home school so that she could later 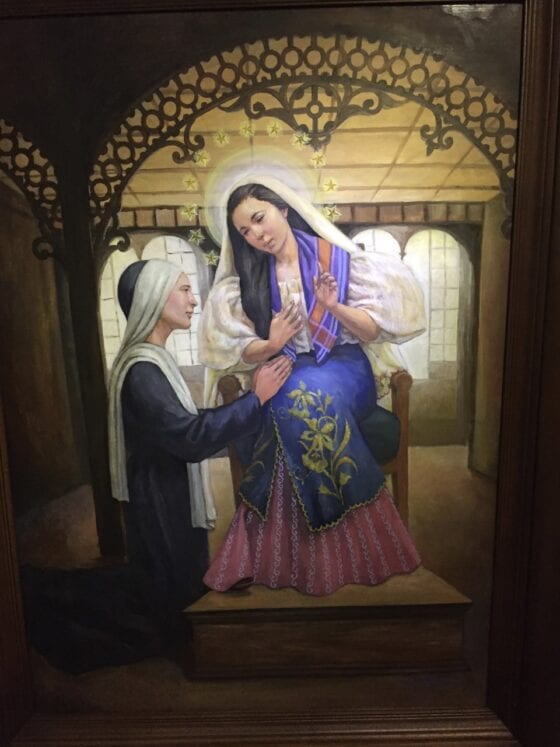 read the Scriptures. Why not think of Mary taking in her hands and reading the Word of God that had the scroll of the law that Joaquin and Ana took to the temple? But, in addition, they must have been hardworking hands for cooking, embroidery, painting and other chores that every authentic Jewish woman did. Wouldn’t it be on a summer afternoon, when the angel, with the Torah in hand, presented himself? The home of Nazareth was that of a poor villager, who without servants tended to her husband, the Child, with her hands, while he, like all of us, was able to fend for himself. Hands that should have taken the hand of her Son to teach him his first letters, lead him by the hand so that he could learn to walk, and once he left home for public life, she raised her hands again and again to bless him. And let’s keep thinking about the time when her son returned home, with her exhausted hands she washed his feet, and waited on him at table. And let’s keep thinking about her industrious hands during the thirty years of Jesus’ hidden life, and that one day when she least imagined, she received in her virginal hands the one who was coming down from the cross, and whom she had caressed with her hands at his birth. Yes, Mary’s hands did not rest, they continued in ordinary wear and tear, in John’s house until she was taken to heaven.

But she is not in an eternal holiday in heaven, but “meanwhile, the Mother of Jesus, in the same way that she is already glorified in the heavens in body and soul, now shines before the pilgrim people of God, as a sign of sure hope and comfort.” Lumen gentium V, 68.

And this consolation she has shown throughout the centuries in many ways and in various places, with unique messages for humanity. Let us mention La Salette, Lourdes, Fatima, up to recent apparitions approved for the church of Kibeho, Rwanda at the end of the 20th century.

THE HANDS OF MARY IN THE VICENTIAN FAMILY, AND THROUGH HER IN THE WORLD

One unexpected day, Mary deigned to choose a family, born of a peasant who venerated her on an oak in his native Landes, and from the heart of a good woman, not a villager but a noblewoman, who one day hurriedly left for Chartres, to trust to her mother’s heart, her humble family of poor peasant women.

And the years passed, the poor were served and evangelized, and this family of consecrated people was in ruins. And it is here when the Immaculate Mother unexpectedly, in the silence and darkness of the night, breaks into the house of those who a thousand and one times every day invoked her as Immaculate, and had made her known and loved by the poor and the rich. There, Mary’s hands are close, they intertwine with the hands of the Burgundian peasant, and by opening her heart she gives her the secrets for the children of Monsieur Vincent and Mademoiselle Legras. The visionary kept many secrets in her heart, but the essential ones she made known to us, among them the predilection for the members of the Congregation of the Mission and the Daughters of Charity: “I am pleased to grant my graces to the Community because I love it intensely.” And as if that were not enough, months later she left us the gift of her Holy Medal. 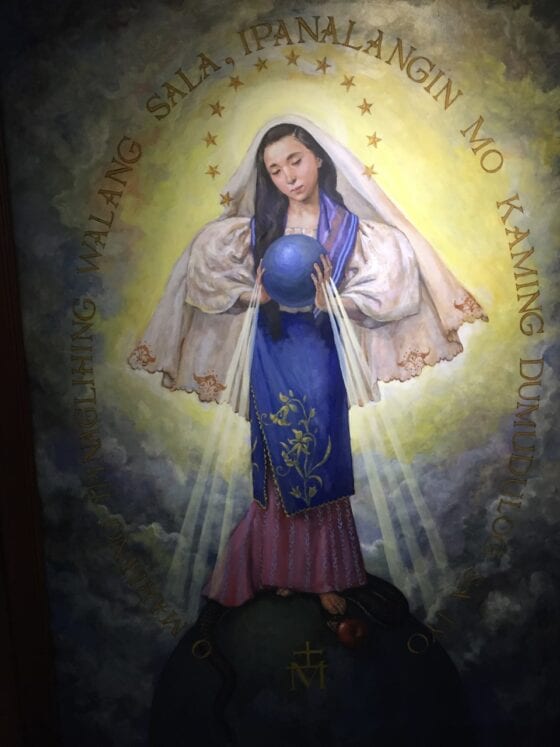 HANDS FULL OF GRACE AND MERCY

And without our asking for it and much less deserving it, she gave us the Miraculous Medal, not for our glory and fame, but as poor servants of such a beloved Mother, to make her reach the ends of the earth, loving her and making her loved by the nobles and uneducated, saints and sinners.

In the Miraculous Medal, we do not find a sedentary or static image of Mary, but agile, dynamic, and youthful movement. She comes towards us with outstretched arms as she ran towards Hebron to serve Elizabeth, or to reach out her hands when a timely help was needed in Cana of Galilee.

She comes with her arms outstretched, welcomes us and opens her hands to us:

– Open hands so that we can raise ours, and cross them allowing their mother’s warmth to warm and encourage ours, often trembling, cold and insecure that in them find welcome, affection and trust.

– Luminous hands outstretched, which emanate rays as a sign of the mission that she has, as mother and mediator of the graces she pours out on the world and on those who ask for them.

– Hands that have precious stones, some of which do not shine or twinkle, which in the expression of the Mother: “They are the graces that they stop asking of me.” And what are those graces that we do not ask for? Or better yet, what do we all normally ask for? Isn’t it true that you and I ask her every day for life, health, the well-being of the family, stability at work? Could it be that we go to her so that all this can reach us, which, in the hierarchy of values, is number 2? And the number 1? The answer is obvious, Jesus, the way, the truth and the life, for every Christian, and for us Vincentians, the evangelizer of the poor, the good Samaritan who reaches out to all misery. It is the grace that we have to implore from him, the others will be given to us in addition.

To Miraculous Mary, who wakes us up at dawn with outstretched arms, opening her holy hands to pour out the goodness that the Lord has entrusted to her, who does not tire of us who “groan in this 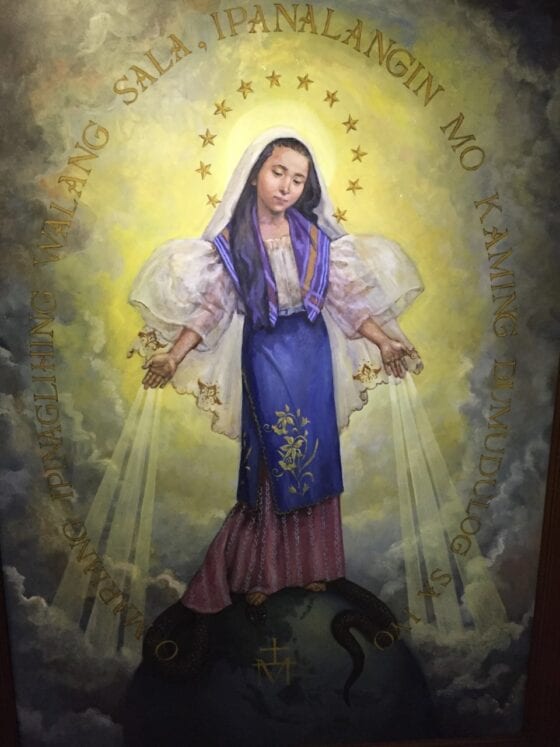 valley of tears” and fills us with everything that we ask for and even what we dare not implore.

Let us not become deaf to the words and testimony of one of our own, Saint John Gabriel Perboyre, who in his experience of missionary holiness tells us:

“Ask Mary to bless your words and actions. When you speak, when you go to confession, when you offer the holy Sacrifice, interest Mary in your behalf. Do nothing without her and you will attract abundant blessings on everything you undertake, because it will not be with our dispositions but with yours that we will receive Jesus.” Yes, this is not only for us priests, but also for you, Daughter of Charity or member of a Vincentian family, open your heart to her so that she can read in the book of your life what you need, and she lavishes on both you and me blessings and graces of Jesus that through her come to us at every step of our pilgrimage.

And as she whispered to Saint Catherine Labouré, so in every moment of our life, in our struggles, toils, joys and troubles, let us say to her with humble faith: O Mary, conceived without sin. Pray for us who have recourse to You.

Pictures from the Philippine Province