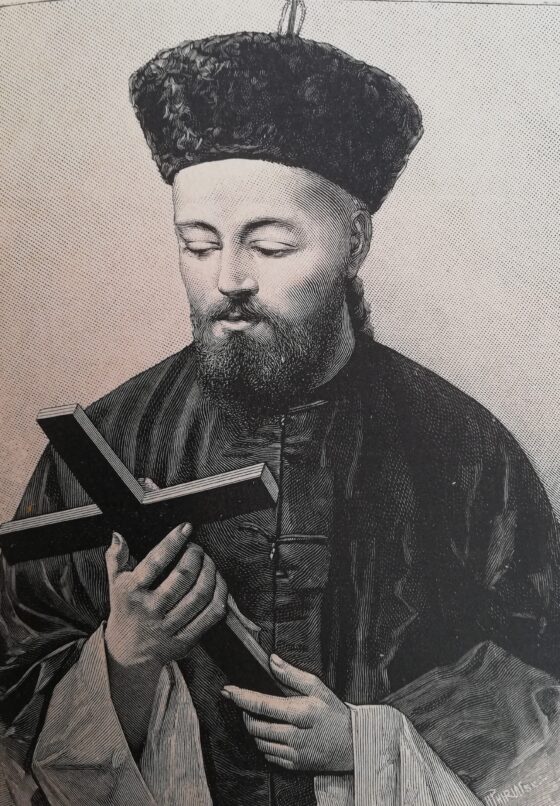 There is no doubt, no one among the famous sons of Monsieur Vincent is as well known in the world and in the Church as Father Perboyre. When in our missionary journey we meet our former disciples, either bishops, priests or laymen, there is no doubt they will allude to the figure of this missionary who, more than any other, touched them deeply and encouraged them in their priestly or lay life.

The unexpected and mysterious reality of the coronavirus pandemic has led us to dust off this extraordinary figure, and to consider the proposal of many to see in him a symbol of the coronavirus and a patron against this pandemic. Recalling his figure leads us to look at him hanging from a cross in Wuhan and martyred by asphyxiation. But, this reflection wants to take another aspect, which can lead those of us who are his brothers in the Community, and those who look forward to it, to consider another dimension of his life, which is like a light that can illuminate our lives.

Since the beginning, John Gabriel had a great clarity on the path to which the Lord had called him: towards a missionary community, with a clear identity, oriented to his own sanctification, to the formation of worthy ministers of the altar and to the evangelization of the least of the society, during the whole time of his life. On the day of his canonization, John Paul II enthusiastically recalled him: “He had only one passion: Christ and the proclamation of his Gospel.

But he did this passion for spreading the Gospel and his zeal to make Christ and the Church known and loved, not alone, but in union and in the name of a community called the Congregation of the Mission.

By the grace of the Lord, some of his writings have come down to us. In his letters, Perboyre’s adherence to the Society is easily demonstrated. He maintained timely communication with his Provincial Superior, Father Jean-Baptiste Torrette, although, naturally, they did not always agree, nevertheless, above all, respect and obedience reigned in him. It is worth remarking the free manner in which he expressed his opinion regarding the organization of the mission; his interest in promoting native vocations… On September 9, 1835, he wrote to Father Le Go, C.M.: “You know everything that concerns the Congregation touches my soul…” And on September 13, 1835 to  Fr.  Jacques Perboyre, c.m. he wrote: Although I have always dishonored this family, I am deeply attached to her, and for her I would give my life a thousand times over”. His love for the Community, as it is, both in its progress and its struggles.

He would not fail to recall the words of St. Vincent again and again, that he taught his seminarians in Paris and that now in the missionary field had to be lived not in a romantic but in a real way: “Charity is the soul of the virtues and the heaven of the communities…” (es XIb,768). How much he enjoyed the community meetings, which were certainly not frequent, but when they did take place, they were a rich space to discuss with his confreres the hardships of the missionary efforts, to rest a little and to deepen his communication with God. The annual retreat, to which he was very faithful, was to restore his strength, worn out by the long walks under the hot Chinese sun. It is quite certain that in one of these retreats he had the providential help of Fr. Baldus, to whom he opened his heart to show him “the dark night of faith” he was going through, and it was on this occasion that a confrere strengthened him to continue to follow the Lord.

Today there is much emphasis on being “builders” and not “consumers” of Community. In the face of human frailty, it is always easier to look for compensation outside the community, to be “light in the street and darkness at home”, demanding workers ardently claiming rights, but lazy, forgetting the duties of state. What else is asked of us today, other than what St. Vincent left us in the Common Rules? VIII, 2.

“Love, like that between brothers, should always be present among us, as well as the bond of holiness, and these should be safeguarded in every possible way. For this reason there should be great mutual respect, and we should get along as good friends, always living in community.…”

And what better prayer, to implore the Lord to be builders of missionary community, in the style of St. Jean-Gabriel Perboyre, than this supplication of the Holy Founder to the Lord:

“O divine Savior, inspire charity in all the hearts of those whom you have called to be part of this Congregation, for only by this mutual love will the strong support the weak and we will all carry out the work you have kindly entrusted to us” (es XIb, 769).