Chronicle of 14 July of General Assembly 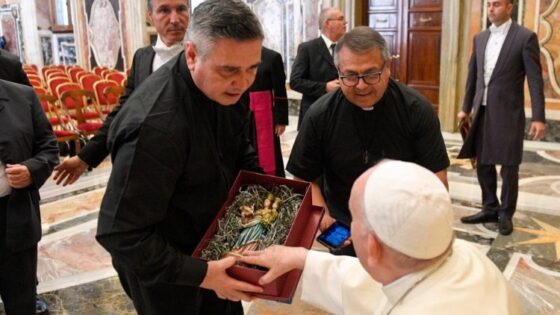 As we enter the final moments of our General Assembly, we began today by placing ourselves in God’s hands. This was a very special day: a private audience with Pope Francis. We left for the Vatican at 9:00 hours.

In the gathering Hall were members of three Religious Congregations whose members were gathered in a General Assembly (or General Chapter). The three groups were: Clerics of the Mother of God, Basilians of Saint Josaphat and the members of the Congregation of the Mission. As scheduled, at 11:00am the audience began as the Pope entered the room. Our Superior General, Father Tomaž Mavrič, addressed the Pope and thanked him for providing us with this opportunity to meet with him. During his introductory remarks Father Tomaž referred to Saint Vincent as the mystic of charity, one who built bridges between the mysteries of our faith and the world, especially the world of those men and women who are poor.

The Holy Father exhorted us to be Evangelizers, not proselytizers, because evangelizing is not proselytism … we are called to be true witness to the gospel. He went on to say that mystical notions without a solid social and missionary outreach are of no help to evangelization, nor are dissertations or social or pastoral practices which lack a spirituality which can change hearts. The Pope reminded us of the need to establish an intimate relationship with the God and to spend time in adoration. Without prolonged moments of adoration, of prayerful encounter with the word, of sincere conversation with the Lord, our work easily becomes meaningless; we lose energy as a result of weariness and difficulties, and our fervour dies out. And allow me to ask you a question: do you worship in prayer? Or have you forgotten what worship means? At the conclusion of his message, he exhorted those present to have zero tolerance with regard to sexual abuse in the Church.

At the conclusion of his discourse, each individual had the opportunity to greet the Pope and we concluded the audience with a group picture.

When we returned to San Juan de Ávila, we had lunch and a time of rest until the afternoon session. As usual we gathered together at 15:30 hours to continue work on the Final Document. After several comments, it was decided to include the presentation of Father Guillermo Campuzano in the Final Documents as well as the various lines of action. This work will be continued tomorrow morning.

This very meaningful day was concluded with Evening Prayer and the evening meal.